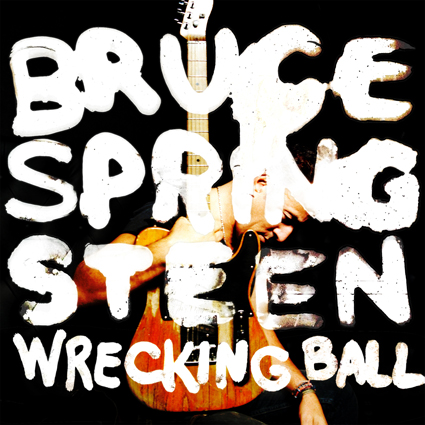 Bruce Springsteen has dug down deep with 11 new songs which speak of his vision of modern life on Wrecking Ball, his 17th studio album.  Pick up the special edition for two additional tracks and booklet with lyrics and photographs.  However, the slightly larger cardboard case won't easily fit into your CD collection.

Produced by Ron Aniello with Bruce Springsteen and executive producer Jon Landau, this ambitious record combines elements of both Bruce's classic sound and his Seeger Sessions experience combined with modern styles.  Members of the E Street Band are back playing with many additional outside musicians

At 62, Bruce still continues to speak his mind, expressing anger that deals with economic injustice, along with songs about these hard and desperate times.   The album opens with We Take Care of Our Own, a strong song that harps back to the sound of Born in the U.S.A. It starts with huge thumping drums, followed by the entry of a distorted guitar and organ, which crangs out the intro, a trademark sound of the Boss. But the lyrics tell a story of how in America the needed help never appears, and thus beings Wrecking Ball.

Easy Money, a song about a man going out with his lover to commit crimes to make some cash, has a rockin' feel that draws from his earlier double album The River.  Like Bruce, his voice is aging, and the dynamic range found on his first albums no longer exists.  However, in the darkness of these songs, there is pure joy in their delivery, which demands the listener to participate by singing along.  Thus the following tune, and the energy of Shackled and Drawn is enhanced by the chorus of female singers that invokes a delightful Irish feel and conveys hope.  There is much room across the soundstage which provides a ambience of a barn house stomp.

The title track is an exhilarating song drawing from a irish ceili.  Lyrically it takes this Jersey boy back with upset and anguish about how things have changed. Bruce sings, "All our youth and beauty, it's been given to the dust," which is not just us aging, but the landscape being destroyed.  Wrecking Ball clearly shows that the Boss is still a great poet.

Listeners will be pleasantly surprised that the immortal late Clarence Clemons sax solo on Land of Hope and Dreams. It is hard to imagine that the Big Man is no longer with us,  and it is one of the high points of this recording.

The standard release closes with We Are Alive, which tells of departed souls rising up in solidarity and strength.  Don't be miffed by the scratchy record that appears at the start of the song… there is nothing wrong with your player.  Bruce's husky voice and jangly guitar really drive it home and brings a smile to the listeners face as he sings the chorus. The bass is deep and drums more natural than the previous tracks.  A real sense of tradition helps close out this fantastic addition to the Springsteen discography.

Two final tracks appear on the special addition.  Frankly, this reviewer sees no reason why the album wasn't released as one version.  Most fans will step up and get this edition, and why not, the extra tracks measure up to the other tunes on the album.  Overall this is clearly one of his best records in years, the production, engineering, and mastering is very clear and full. No MP3's will offer the clarity of this CD release, stick to the lossless formats for the best impact.