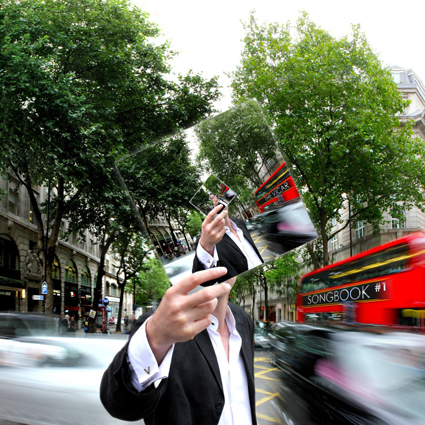 Listen up, Songbook #1 by The Vicar is literally one of the most intriguing and innovative records of our time. A throwback to the psychedelic sixties with an air of Beatles, King Crimson, and an edge of Phillip Glass, the album traverses many musical styles while staying the course on its unique sound. Composer David Singleton has brought together several renowned musicians including Robert Fripp, Tony Levin, Jakko Jalszyk, Theo Travis, and Andy Yorke, among many others. Gone are the drums in exchange for chamber instrumentation that hold down the rhythm including cello, double bass, violin, viola, clarinet bass, flute, tuba, and trombone. These instruments play a prominent role in most of the songs and carry the overall feel of the record which energizes the listener with its soothing sounds.

Released as a CD and DVD-Audio set, naturally my primary interest is the surround sound mix which is truly spectacular. David Singleton has some previous experience here having engineered “Follow” by Fripp & Travis, along with “A Scarcity of Miracles,” the 2011 Jakszyk, Fripp and Collins release that has been considered an unofficial King -Crimson band by some fans.

The music is very dynamic and is well balanced throughout the sound stage. Typically, strings are at the back, with vocals and bass taking the front, along with wind instruments, guitar and piano panned toward the sides. No instrument seems to overpower another, and the surround sound mix keeps everything pleasantly separated while maintaining a congruous blend.

I really enjoy the aural quality of the rich cello and double bass which resonate well from the subs. The piano is airy, and strings are silky without sizzling at the top end. Listeners will likely feel the strings and winds close to their ear, each gently playing their parts for a private audience. The mix is very natural, with little to no treatment, providing for a clean and relaxing sound scape.

The Vicar has created a fabulous release that is best for music fans that sit down and actually take in the album. Check out the Alt Rock Chick's complete review of the fourteen songs on this 2013 release, or just listen to a track below to get a feel of one of the varied songs.

As a bonus, you will want to check out the 38 episodes of the Vicar Chronicles, which as Paul Harvey would say, is the rest of the story. Also, on the DVD are extras that include comics and a music video of the song Count Your Blessings. The DVD includes the entire album in 5.1 surround in both 96kHz / 24-bit Advanced Resolution and DTS Digital, along with 24-bit LPCM Stereo. Every song is accompanied by lyrics displayed on the screen, and the navigation on the DVD is one of the easiest I have encountered on a surround sound disc.

Strongly recommended for psychedelic and progressive rock fans. An engaging listen that will surely keep you coming back for more.