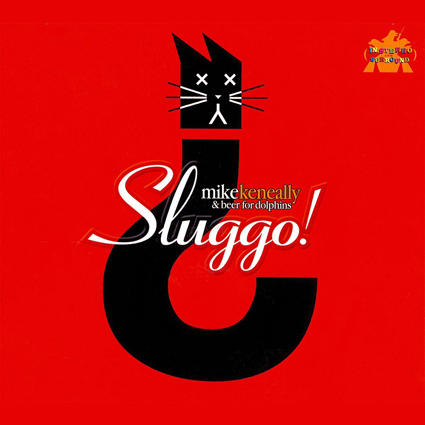 Mike Keneally's inventive 1997 release Sluggo has been reissued as a upper deluxe set including a new surround mix.  Out of print for several years, Keneally always had reservations about the original mix, but the upshot is he is completely happy with the sound of the revamped album, and so am I!

The super deluxe set contains a CD with the 2013 stereo mix including two bonus tracks, "Craney" and "Bob Dylan's Nose"  The DVD-A contains both MLP 24bit /96kHz Lossless Stereo and 5.1 Surround mixes, along with a PCM 16bit / 48kHz Stereo and DTS 24bit / 48kHz  5.1 Dolby Digital Surround format.  The second DVD has over two hours of unreleased live and studio video material (stereo only), along with the original 1997 stereo mix, additional bonus audio tracks, and even shots of the original tracking sheets.

The surround mix is the creme de la crème of this content rich three disc package.   Keyboards step across the rear channels and guitars accent from the same.  The bass and drums hold down the front channels with energy of a live band while reflecting off the rear channels adding depth.  Listeners are immersed in the Zappa-ish musicality which Keneally and his band lay down on this album.  No wonder, as a former side man for Zappa’s band, Keneally and Beer for Dolphins are woven from those threads.

The track “Chatfield Manor” is a perfect example of the dynamic depth to the new 5.1 surround mix.  Backing vocals call from the rear channels, with guitar slides pulling forward back the back.  The guitar solo reverberates across the soundstage while the smooth round bass anchors the front channels.  As a high resolution fan would expect, the balance is excellent, with no sharp edges, and tons of warmth to fill your ears.

Don’t just stop at the second disc, there is plenty of amazing content of Beer for Dolphins playing live and at studio gigs.  While the camera work is a bit loosey goosey, the overall quality is pretty darn good.  Sound is above average and really conveys the energy of the band performing live.  From a mix perspective, it is interesting to take a listen to the original 1997 stereo mix.  I found holes and a lacking of impact from this earlier mix, and can easily understand why Keneally was never happy with it.  The new stereo mix corrects all that, and the surround mix is simply fantastic.

I delayed in picking up my copy of this album, a real mistake.  Fans of high energy, intricate music with a Zappa edge must get this as soon as possible.  Albums like this renew my faith that great music is still being written, and I am delighted to add Sluggo into my surround collection.  Seriously, don’t delay, pick up your copy today.

CD and DVD 5.1 Surround Sound, and second DVD with video and additional material.