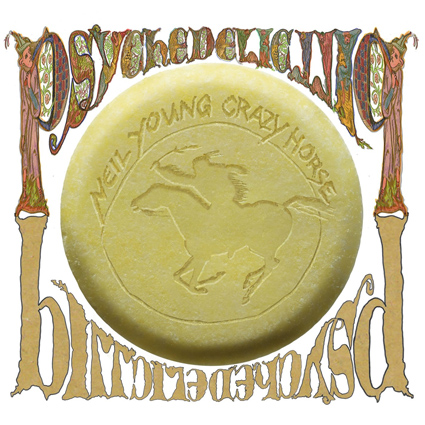 Neil Young and Crazy Horse have released their first album of original music in almost a decade, now available in a few formats.  Ahead of his lossless music download site, Pono Audio (www.mypono.com/) planned for mid 2013, Young continues to release his music in high resolution formats.  Before we get too deep, it is important to note that the Bluray Audio disc contains additional tracks not found on either the vinyl record, nor compact disc formats.  We picked up the Bluray, not only for its lower cost, convenience, but its additional features and songs not found elsewhere.

Over the past couple decades Young's releases have been hit or miss.  Of late he is on an upswing, and Psychedelic Pill is a strong release that will surely excite fans who especially like long jams and loose garage feel of the work he has done with Crazy Horse.

As the album starts, a warm acoustic guitar and Neil's voice sing out "Driftin' Back," a positively epic track which transitions into a nearly half an hour jam with plenty of guitar solos. The lyrics--concerning the growing commercialization of music and art, and the "failure" of the 60's counterculture movement to induce change are secondary to the marathon jams that cause the listener to literally drift away into a hypnotized state of euphoria.

Another standout track is the excellent, 16 minute "Walk Like A Giant," which echoes "Driftin' Back"s theme of the failed promises of the Love Generation, with some of Young's best, most moving lyrics in recent memory: "Me and my friends, we were gonna save the world. Then the weather changed and the white got stained...and it breaks my heart." The fuzzed-out, squalling guitars dominate the song--which showcases some great backing vocals and musical interplay from the rest of the band--until it degenerates into a clangor of noise for four straight minutes, likely reflecting the shattered dreams Young sings about here.

A few shorter numbers such as "Twisted Road"--a heartfelt tribute to Bob Dylan, Roy Orbison, and the Grateful Dead--show that Young hasn't lost the ability to write a great, simple pop tune. However, while well written, the title track makes heavy use of flange on both guitars and vocals drifting from one speaker to the other, resulting in a hallucinatory, tripped-out listening experience that feels extremely exaggerated.  The alternate mix available in the extras menu is more down home with little flange effects present.  Neil picks it up again with the catchy three-chord groove of "Born in Ontario" an uplifting infectious tune, with an accordion laced chorus.

All is not perfect though, the slightly underwhelming "For the Love of Man," a leftover song from the 80's seems too subdued and out of place on an otherwise visceral album.  However, the lyrics concerning Neil's cerebral palsy-stricken son are touchingly poignant and fit well with the album's theme of catharsis.

A fun feature of the Bluray is the graphics that go along with the songs. Some have old black and white movies, while the others have mostly kalidoscope type visuals. These move well with the music, making a great backdrop as the jams progress.  As a surround enthusiast, I can't help but wonder why a 5.1 mix was not made for this release.  It seems that the music lends itself well to this format.  However, the high resolution LPCM stereo mix is excellent.  Harking back to the 70's era sound, the drums are mostly flat, and the effects from the guitars appear to be managed by the musicians, rather than the audio engineer.  Instruments are panned wide across the sound field, again another common style from the 60's and early 70's, and the bass and kick drum are not overwhelming, which seems typical in modern day releases.

If you are considering picking up the vinyl release, here are a few points to consider. While it is technically 3 disks, the final side has no music, instead it has a cool etched/pressed Crazy Horse image, There was probably no way to avoid this as the running time and level cut dictated the number of sides. Yet this adds to the cost of the version which is nearly $70. Also this release was created to fit within the modern CD format and does not translate well to LP. The long, Drifting Back track had to be split between two sides of an LP.

The Bluray contains a real bonus over the other formats, the 37 minute long "Horse Back" an excellent free spirited jam, truly one for the fans, with a 20 plus minute intro, leading into a slow and deliberate Pocahontas. This version gives the song so much feeling and emotion. While also really rocking..Don't miss the accompanying video, with the  camera slowly panning around Neil's studio, highlighting the mixing boards, drums, guitars, and hand-written lyric sheets, shot while there is no one in the studio.

Running nearly 90 minutes, excluding bonus material, one would think that the album's long, meandering jams would get old after a while, but that couldn't be further from the truth. 'Psychedelic Pill' shows signs that Neil Young could possibly be entering a renaissance period, a remarkable feat for an artist in the midst of his sixth decade of making music.