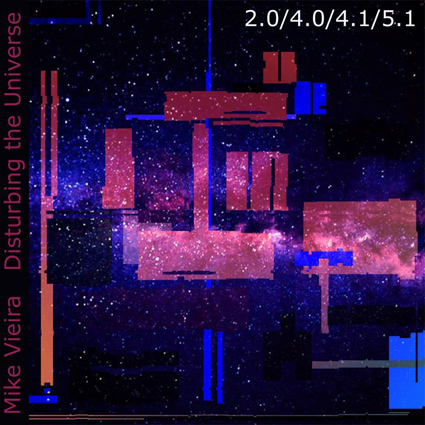 For years we have heard about all of the innovation from the San Francisco Bay area. These are definite disturbances to life on earth for those who dislike change, and now San Francisco resident Mike Vieira has released “Disturbing the Universe,” a playful album that has been compiled from works over the past several years.

It was through his interest in quad recordings that lead Vieira to collaborate with mixing engineer Cristale, who would send Mike well executed remixes of tracks that translated wonderfully into 4.1 and 4.0. As I have discussed on Mediaversal before, mixing is an art form which creates a unique palette for every mix, and often a multi-channel version will become my first choice for listening as it provides a soundscape that simply can’t be obtained with a stereo mix that has no depth that extends into the listening room. Vieira notes that he grew to prefer many of the surround mixes over the original stereo mixes, and I wager for similar reasons as I have mentioned above.

Few artists go through the additional work of creating a 5.1 mix, and it is even less common to find an artist that will compliment a 5.1 mix with a 4.1 and 4.0 alternative. Vieira explains that he wanted to provide versions that best suited the listeners environment and preferences, as some surround enthusiasts prefer quad over adding a center channel, while others prefer not to incorporate sub woofers into their music system. For me, this became a perfect opportunity to check out the differences among these various formats, and we’ll get to that shortly.

Disturbing the Universe contains 11 tracks, with 4 additional bonus tracks added at the tail. Crossing among dark metal, to pop punk, and power ballads, this is a fun album that carries the raw emotion of a club performance. “Break You” places the overdriven bass in the rears while the drums pump up front. Lead vocals take the center channel while backing vocals fall all around. Note the synths that push through the mix on this punkish piece.

There are great transitions on the track Prince of Peace as it moves from heavy guitars to acoustic rhythms. A nice use of all the channels immerse the listener with this power ballad. One can hear the room that sits around the drum kit, and I enjoyed the synth pads placed on the sides which add some distance and depth to the mix. Likewise, it is a pleasure to hear a full acoustic guitar which strums clearly up front in the mix.

An organ fades in from the front while synths are added in the back on Dancing Skeletons, a somber song the elevates into a pop rock feel as it progresses. The surround mix encompasses the listener with percussion that percolates from the rears along with harmony vocals that sweeten the aural experience.

Throughout the album there is some wonderful interplay between parts that cross between left and right channels. Continuing on the same theme, “Skeletons Under Cover” make excellent use of this interplay taking it to a new level as the keyboard intro moves around the four main speakers. Check out the gated snare whooshing from the front to rear channels. Bass throughout has been smooth, and instruments distinct.

One of the best use of the soundscape is the final track of the album, “Illusions.” Doubled a capella voices open the song from all corners of the room. Gritty guitars riff from the rears while bass and drums hit it up front. Brass horns sprawl across the front as the song builds. It is a fulfilling mix that provides enough space to easily hear all of the parts.

All in all, Disturbing the Universe is a very good 5.1 mix. Now, let’s see how it holds up when listening to mixing engineers Cristale’s downmixed into the quad realm. The obvious difference is the center channel has been folded down between the two front channels, which will alter the perceived location when listening outside of the sweet spot. To that end, I find I prefer the direct use of the center channel, with a minor reservation. When isolated in the center on the 5.1 mix, one may perceive a loss of integration, as parts placed in the center channel standalone from the balance of the mix. Yet, the perceived location is now in the center for those cases where a listener sits out of the sweet spot.

One other subtle difference is a slight heavier weighting at the very bottom, attributed to the signal send to the sub-woofers in the 5.1 mix, and stripped from the 4.0 mix. Obviously, speaker size, cross over balancing, and room acoustics will have an effect on the low end. From my perspective the Quad mix effectively sounds as good as the 5.1 mix, regardless of these minor differences.

Vieira is in the process of releasing a Quad reel-to-reel specifically for the enthusiasts who have amassed a collection of this format over the years. However, due to time limitations on the format, nine songs from the album will be presented, and the bonus tracks will be omitted. On the other hand, all 15 tracks are included on the download which is available as a 2.0, 4.0, 4.1 and 5.1 24bit / 48k FLAC file, and fans may select one or all of these formats when purchasing the album.

As noted above, high resolution stereo audiophiles can enjoy Mike Vieira’s latest release as a 2.0 as a FLAC 24 bit / 48k download. Musically this version fits together extremely well, and in certain ways pulls parts together that are otherwise isolated in the surround mixes. But, elements do not pop out like they do on the multi-channel versions, plus aspects of the instruments and vocals are masked, such as the space that surrounds the drums, and the depth of the backing vocals. Just as I had noted at the start of this review, each mix paints its own palette, and this becomes very clear when listening to the various formats offered. I am still a fan of 5.1, and that remains my personal choice, but you may feel very differently than I do, and we can thank Vieira and Cristale for taking the time to give fans a few options.

Disturbing the Universe is recommended for surround enthusiasts, fans of acoustic rock, metal, and a smattering of world plus progressive, and certainly listeners who enjoy a playful spectrum of music.