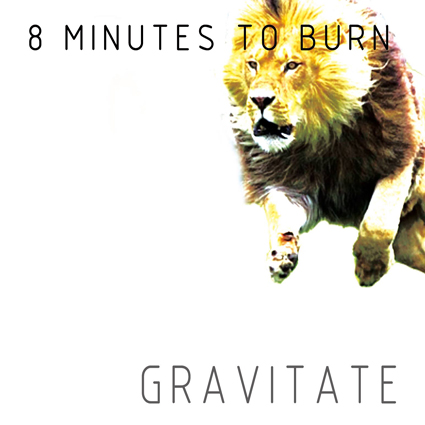 Tucson, AZ based 8 Minutes to Burn released their album Gravitate in the spring of 2015 featuring elements of southern rock, New Orleans funk and roots reggae. Their raw energy comes through in the cover art depicting an Asiatic lion, which the band considers their "spirit animal."

Initially released as a compact disc, high resolution fans now can download a stereo 24bit / 44.1kHz FLAC version from their page on BandCamp which dramatically improves the overall sound quality when compared directly to the CD. Since both options utilize the same sampling frequency, hearing the dramatic difference demonstrates how bit depth plays such an important role in holding true to the original studio masters.

The most obvious differences between the two mediums can be easily heard as changes in tonal coloration. Specifically the CD suffers from a brittle edge that is noticeably bright. The upper-mids are harsh, taking over the entire mix focusing the listener to guitars and snare as they slice their way through the songs, meanwhile the bass has little presence and I felt fatigued after only a few tracks. Let’s remember, this is 16bit / 44.1kHz doing its best.

On the other hand, the 24 bit / 44.1kHz FLAC files have no edge, exemplifying that the mixing engineer placed everything comfortably together to create a powerful rich and vibrant sound. Listeners can crank this up and feel no fatigue while 8 Minutes to Burn lays down their groove. High Resolution Audio fans will feel like they are at one of the shows, with a robust bass that rounds out the bottom and chunky invigorating guitars with tasty solos that carry on the tradition of Jam Bands. Vocals fit in nicely, and from a production standpoint, Gravitate doesn’t lean on many effects or an overuse of reverb that has become so common with pop releases.

This is purely fun music with crafty lyrics and a party vibe. Gravitate is a very worthy album to include in your collection, especially as a FLAC download given its superior sound quality. Check out the stream below, and tap your way to your copy today.