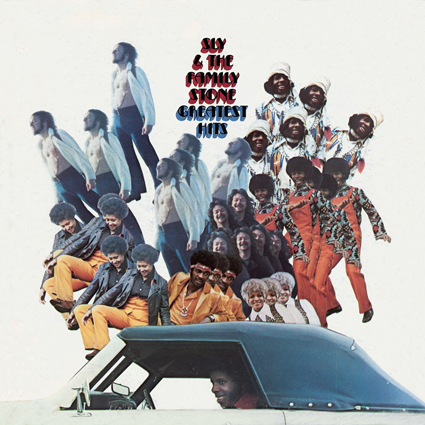 Summarizing Sly & the Family Stone's hit-making run on the pop and R&B charts, their 1971 Greatest Hits is now available on SACD with both quad and for the first time all original Mono "Hit" mixes. Oh sure, only four songs on this collection reached the Top Ten, and another two only hitting the Top 40, but don’t judge their Greatest Hits on chart busting, rather consider this a superlative singles collection. Pulling songs from their first four albums and adding the non-LP singles "Hot Fun in the Summertime," "Thank You" and "Everybody Is a Star," simply making it one of the greatest party records of all time.

I am starting to see a pattern in how 70’s Quad mixes were handled. Unlike current day surround mixes, drums are often tossed to the right rear, bass to the left and vocals and rhythm instruments up front. Sly and the Family Stone Greatest Hits stands on that basic model, but you may not care because it will be hard to stay in your sweet spot seat throughout the album.

The opening track “I Want to Take You Higher” kicks everything into high gear with a warm and crunchy sound. I really felt like the vinyl was spinning, but thankfully lacked the surface noise common to many LP’s. While not as transparent as modern day recordings, the original quad masters have held up extremely well and demonstrate an absolute mastery of audio engineering with fantastic overall sound quality.

Get used to the drums in the rear, and yes even the lead vocals on “Stand” have been placed in the back right channel over laying the bass part. Responding harmonies call from the front channels with horn hits and rhythm instruments. I guess if these unorthodox mix methods really are too flipped, just rotate your sweet spot by 180 degrees! After I did this, it was a whole new experience.

With all of the parts panned to the four corners of the sound stage, this is a very wide mix with plenty of vacant space. The isolation may seem like too much for some listeners, but I rather like it, as it really reminds me of playing in a band where the musicians are spread around the room.

Their Greatest Hits is so much fun, with vocals spread to the four corners, along with no absolute consistency to instrument placement. Not only is “Dance to the Music” an awesome song, the quad mix of this track is probably the best in this collection. Clapping Is heard from the front channels, with tambourine emanating from the rear left and snare from the rear right. Not only is the listener surrounded by percussive sounds, but the rich bass is duplicated by bass and keys from the right rear to the left front, along with vocals spread widely smack in front.

Since these recordings were from multiple sessions over a few albums, there are clear differences in coloration of the instruments and vocals. From a fatter snare to a rounder bass and richer vocals, it is all so easy to hear. Get down with “Sing a Simple Song” which places the drums up front and grounds the bass in the rear along with the horns spread across the back. Don’t get too comfortable as it is all mixed up again on the closing track “Thank You.”

And there you have the best party album in quad, now go back and play it all over again in mono! No more compressed AM radio with a tiny speaker, instead the full spectrum with excellent overall sound quality and wonderful dynamics. Of course, notice the slight differences in the mixes and timbre, but don’t get me wrong, the mono layer is very satisfying. Of course I still bought this SACD version for the quad mix.

A must have for all music fans, dance party fanatics, and of course surround sound enthusiasts! Make sure to invite your friends over, and crank it up.

Important: Be advised that the first pressing was reported to have a problem on the mono layer. It sounded 'off-center' and resolved with re-pressing, apparently due to a time delay offset between the left and right channels. The defective Audio Fidelity SACD is identified as AFZ5-215 and the corrected replacement SACD is identified as AFZ5-215-3.  It has been noted that the defective discs have been offered for sale on sites such as eBay.