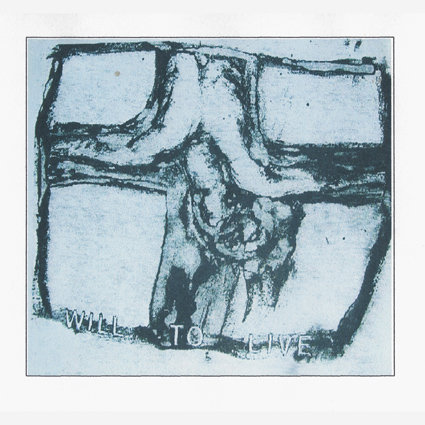 When Amor Fati luckily found the original 8 track tapes from the 1985 recording studio sessions for his band Wil to Live, he knew it was time to bring it back in high resolution on Blu-ray. Back then when it was first released on vinyl, the band didn’t have the resources nor expertise to mix it the way they wanted it to sound. After the vinyl sold out, Will to Live subsequently was released on CD, but Fati was well aware that it lacked the sound quality of a 24bit / 96kHz codec. Thus the album was remixed for the high resolution format including a 5.1 mix, which readers here know provides a lot more space and definition across the soundstage.

Fati spent two years assembling video stills that accompany the music using all the pictures of the band, plus included the only video concert of the band recorded at the well-known Trenton, NJ music club City Gardens in 1984. For all I know and can’t recall, I may have been in the audience, as I often attended concerts at this very venue during this period of time!

But, let me not reminisce, and instead share why you want to add this Blu-ray to your collection. Their style follows in the steps of the punk era of the late 70’s heavily blended with psychedelic grooves that remind me a bit of the band Chrome from that era. The mix leans toward the front, with a heavy focus on the center channel. The back channels suck you in with distorted sustained noise that comfortably compliments the throbbing beat set forth by the band. There is a real glisten to the surround mix, and parts are distinct without stepping on each other.

Contained on the Blu-ray are both a DTS Master Audio HD 5.1 and LPCM 24bit / 96kHz 5.1 codec of the studio album which was remixed in 2017. Also the original 1985 stereo mix is presented as a 24 bit / 96kHz LPCM flat transfer. There are vast differences between the surround and stereo versions, each yielding an entirely different aural experience. I can say that I prefer the DTS HD Master Audio codec over the LPCM due to a rounder bottom and slightly decreased top end. While I am tossed into the center of the full blown psychedelic throbbing when feasting on the surround mix, there is also an extreme retro feel to the stereo version which takes me back to the days when young bands like Will to Live were able to get their music into the hands of fans without having to sign a record contract. The stereo track is wild with guitar soaring between the channels while the band kicks it down the middle.

While listening, I remembered the blasting music emanating from the walls of City Gardens, and realized that this album would probably be best served up at that level of intensity. It is not that it doesn’t come across at lower levels, but there is a sensation one can only feel when a jet engine roars, and I believe the same is true here. So, screw the neighborhood, I have the power.

You will want more after arriving at the end of the studio mixes, and thankfully there is a bunch of bonus videos filmed live at one of their concerts at City Gardens in 1984. It has been upmixed to surround, providing somewhat of an immersive feel. Don’t expect top notch filming here, but you will experience the raw essence of the band as they spew out their punkish psychedelia.

It is a little hard to find this gem, but well worth hunting it down for fans of punk and psychedelic rock. Collectors who want a real listen to the ground level of music from this era most definitely will want a copy.