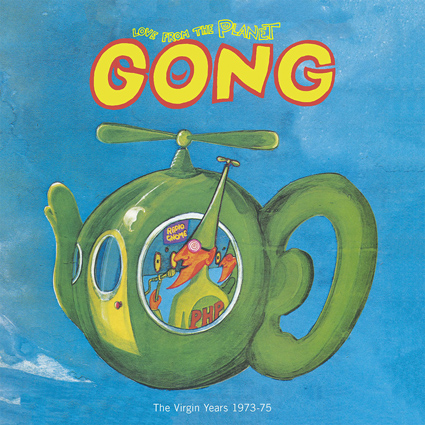 For many in the 1970’s it was Gong that introduced them to true psychedelia. Taking one hit of the band’s music certainly could send one on an illustrious journey that could take a while to return from. Now a 13 disc / 127 track deluxe box set brings back those daze from their Virgin years featuring tongs of rare and previously unreleased content. Remastered for the very first time from the original Virgin masters by original engineer Simon Heyworth and Mike Howlett from the band and curated by Steve Hillage.

For surround enthusiasts, the gem that is buried in this deluxe set is the previously Unreleased quad mixes of the band’s 1974 album “You.” Both the Pye and Westlake mixes of side one are found on the DVD, along with a quad upmix of side two. But in order to mine that gem, fans will need to shell out for the entire box set that also contains the first four studio albums and bonus tracks, along with the John Peel 1973 & 1974 sessions from BBC Radio One, songs from the Edinburgh Festival in 1973, their concert at the Bataclan, Paris in 1973 and a show at Club Arc En Ciel, Roanne in 1973, plus a CD from their free concert in Hyde Park, London in 1974, and more live material from their London Marquee Club promoting the release of “Shamal.” The set also contains notes by Jonny Greene of the Gong Appreciation Society, plus an expanded edition of the famous “Blue Book” of lyrics and doodles which is now being called “The Green Book.”

That is a long trip to unearth the quad gem, but it is one that must be taken to enter the surround world of 1970’s Gong. Fans will receive a really nicely packaged box set that contains a hardback book with many notes and photos.

The really cool news is there are two different choices for the quad mixes of the first side of the album “You.” Go ahead and enter the quad world of gong, and one will find themselves completely immersed, placed right on the planet with Gone emanating their unique blend of psychedelia.

It is worthy to note that their uniqueness may not be for everybody. But I have loved them from the first moment I heard their psychedelic jams over four decades back. Gong uses a variety of instruments creating ethnic fusion musical passages, featuring engaging melodies. The mixture blends psychedelic rock with jazz fusion, electronic ambience, and under pinned by world beat influences. Going beyond the music, the quad mixes are tastefully done, providing plenty of fun ear candy, perfect for those like myself who thrive on movement within the mix. The fun already begins on the opening track, “Thoughts For Naught,” where the percussion moves briskly around the four speakers. Overall, the sound quality is quite good, with a nice clarity across the upper regions that absolutely enhances the enjoyment of this classic album.

I just dig how the gong bashes at the end of the next piece, moving across the soundscape while the elongated ‘Ohm’ throat chant extends around the room, pushing me further back in my seat. Ear candy just keeps on rolling in, with synthesizer swells that penetrate from various speakers, while vocals hauntingly reverberate subtly across the soundscape.

Delving in further, the fifth track “A Sprinkling Of Clouds” fades in with synthesizers that swirl from the back channels. Additional parts are introduced in the front speakers while the back channel split into two sequenced parts, providing for a wonderful quad listening experience. With much of the sonics pouring from the rear channels, I feel as if I am floating across the sky with puffy clouds all around. Jazz infused drums squarely hit between the front channels while synthesizer solos reflect between the left and the right. The band’s incredible blend of psychedelic, atmospheric, and jazz fusion continues to make Gong a favorite for me, no matter the incarnation, I always have found their talent and writing to be remarkable.

Another plus heard on the DVD is its nice analog feel, especially at the bottom end. Additionally, the upper midrange and top end offers a fantastic level of brilliance, all while remaining transparent and dynamic. The quad mix absolutely brings ‘You’ to life, opening the album up to new dimensions.

Arriving at the second side of the album, some fans may have a bit of trepidation given that it is only an upmix sourced from the stereo master tapes. However, I believe one will be pleasantly surprised, like I was, at how immersive and consistent the mixed actually sounds. Certainly this is not a pure discrete quad mix, but nor is it a simple mirror of the stereo image dressed up and placed behind the sweet spot. One can hear parts that clearly fall in the back channels including tom-toms separated from the drums up front. Also, synthesizer and wind instruments find a home in the back speakers while the front channels boast a very wide soundstage.

Yet, having said all of this, of course, there is nothing like a true discrete quad mix. However, I must say again that this is a very impressive upmix, obviously taking advantage of the modern digital tools which clearly have aided in the creation of a very immersive up mix of the second side of ‘You.’ At moments part shoot from the front, rolling to the back, while echoes reverberate across the soundscape. Still by virtue of the upmix process one may notice a slight movement of instruments such as the horn which slightly shifts across the front channels. In a weird way I rather like this movement, but let us remember that I am a fan of ear candy, with a delightful enjoyment of the aural sensation of movement within a mix. At the start of “The Isle Of Everywhere,” check out how the voice is pop out from the back channels, among many other sweet subtleties throughout the three upmixed tracks found as part of side two.

All of the quad mixes are available in 96kHz / 24-bit, plus the DVD also contains a 96kHz / 24-bit stereo remaster of the complete album “You.” The stereo edition sounds absolutely clear and boasts a fantastic separation of channel. It surely would have been nice to include the other albums found within this massive box set on a second DVD remastered in high resolution too! The lack of additional hi-res material did give me pause before plunking down a C-note, and even more surprising is that the quad mix of “Shamal” has not been included here.

“Love from the Planet Gong” does provide value for fans seeking to experience their live concerts, with four different shows mixed by the bands’ Bassist Mike Howlett, there is plenty of material to sift through across the twelve CD + 1 DVD box set. Jams and space grooves are abundant across the live discs, providing a historic view into the band during their years on the Virgin label.

I can only recommend this box set to deep pocketed fans or quad collectors who must have everything. Yes, it is a well packaged set, but truly lacks in real value for high resolution enthusiasts. On the other hand, in short, if you are like me and willing to shell out the money to listen to the quad version of “You,” then by all means get this box before the limited edition goes out of print.

For details of everything contained within Love From the Planet Gong, please visit Discogs.com
Released September 27, 2019