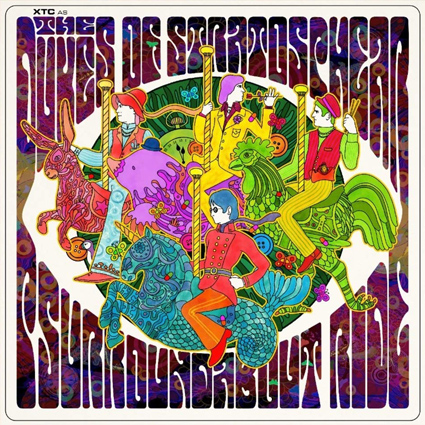 Phasing and flanging in and out of existence in 1985 and 1987, the Dukes of Stratosphear were the flower power band formed by the same members of the well-known new wave group XTC. Now there is no need to drop a hit or eat some mushrooms, instead just position yourself in the sweet spot in your surround listening room, power up and play the Blu-ray featuring all new stereo and 5.1 mixes of the bands two studio albums. This 2019 deluxe CD + all region Blu-ray edition has been remixed by Steven Wilson and presents the music of XTC's Andy Partridge, Colin Moulding, and Dave Gregory masquerading as a psychedelic 60’s band called “The Dukes of Stratosphear.”

The band released their debut mini-album “25 O’clock” in 1985, and two years later followed it up with the album “Psonic Psunspot.” This set compiles both albums plus two extra tracks mixed in 5.1 surround by Steven Wilson, with a final song up-mixed to surround using the Penteo audio system. All 19 songs appear in their original mixes in hi-res stereo on the Blu-ray, while 18 songs appear in their new mixes in hi-res stereo. The Blu-ray also contains complete demos from both albums and instrumental versions of the album songs in hi-res stereo.

1 CD + 1 Blu-ray deluxe edition with all new stereo and 5.1 mixes by Steven Wilson.