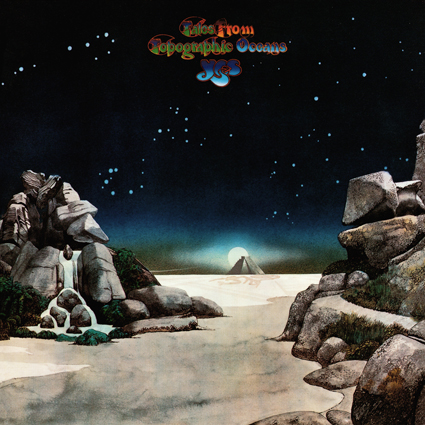 Revered by many and disliked by others, Tales from Topographic Oceans became the first UK album to qualify for Gold certification solely based on pre-orders. Topping the UK Album Chart plus reaching number 6 in the US, where it also attained Gold status, it is now released is a deluxe edition with an all new 5.1 surround sound mix by Steven Wilson. As a leader of the progressive rock movement, Yes was a master at creating concept albums, taking their art to the extreme by releasing this as a two LP set. Based on Jon Anderson's interpretation of a footnote in the book “Autobiography of a Yogi” that describes four bodies of Hindu texts, collectively named the shastras. Both guitarist Steve Howe and singer Jon Anderson wrote the themes and instrumentation for the four long tracks based on each text. Following its release, Tales from Topographic Oceans received a mixed critical reception and became a symbol of progressive rock excess with its detailed concept and lengthy songs.

The 3 CDs feature a 2016 mix of the album by Steven Wilson plus an alternative extended Dance of the Dawn (mixed from multi-track by SW) and 5 single edits. The CDs also include a complete alt. album with High The Memory (unreleased studio run-through) and Ritual (live in Zurich, April 1974) - fully restored audio from original sources.

Of course, we are most interested in the NTSC Region Free Blu-ray which contains a 24-bit / 96kHz DTS-HD Master Audio 5.1 Surround Sound mix directly from the original multi-channel tapes. Also high resolution enthusiasts will find the new stereo album mix in DTS-HD Master Audio 24-bit / 96kHz, plus the flat transfers from the original master tape of the album as a 24-bit / 192kHz DTS-HD Master Audio, which is believed to be the earliest master of the original mix to be issued in the digital era. Also included is the full alternate album featuring: sides 1 and 3 from the 2003 Rhino CD, previously unreleased studio run-through of Side 2 and previously unreleased live version of Side 4, plus an exclusive needle-drop of an original UK vinyl pressing transferred in 24-bit / 96kHz audio and US branded promo pressing, along with instrumental versions of the new mixes in stereo DTS-HD Master Audio. Finally, as a bonus, Steven Wilson has remixed both stereo and 5.1 versions of Dance of the Dawn plus stereo version of 5 single edits. Wilson says, “I worked on and off for about 3 years on this new mix in my quest to do it justice. I hope it will satisfy the people who agree with me that it may just be Yes's pre-eminent masterpiece.”

Not only is this a musical masterpiece from my perspective, but also an incredible mix by Wilson. He has taken this album and given it an entirely new life that surrounds the listener with exalting depth and separation. This is the kind of album that truly represents genius at all levels, including the outstanding mix.

There is so much material here to sift through, that I want you to explore the album and discover its aural treats as you progress through the journey. It absolutely sounds phenomenal and hands down is the only edition you will ever need.

Tales from Topographic Oceans is a must have for Yes fans and surround enthusiasts. Progressive pioneers are recommended to start with Close to the Edge and Fragile, both reviewed on this site. These earlier works are more accessible, and Tales is an acquired taste for the complex detailed progressive rock lover.