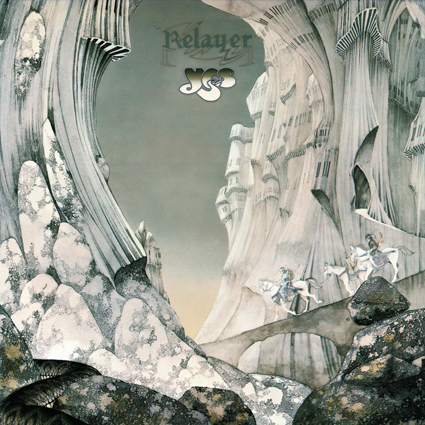 Yes has really pumped it up with their tours and reissues. Fans have already been loving the first two multi-channel remixes, and now Relayer is the next in line!

Like the first two Blu-ray deluxe reissues, Relayer comes in a gatefold mini vinyl replica with booklet featuring new sleeve notes by Sid Smith. The new mixes have been fully approved by Yes, and Steven Wilson has pulled the original studio multi-track masters to re-create the album for surround sound, along with new stereo mixes.

These new mixes are featured on the CD, while the Blu-ray contains both stereo and 5.1 LPCM and DTS-HD Master Audio 24bit / 96khz mixes. Also included are flat transfers from the original master tape source in 24bit / 192khz resolution, and a needle-drop of an original UK vinyl A1/B1 pressing transferred in 24bit / 96khz audio. The Blu-ray also exclusively includes the instrumental versions of all new mixes in DTS-HD Master Audio stereo 24bit / 96khz for all of those wanna be singers. Also you'll get numerous high-resolution audio extras in stereo including demos and studio run-throughs of album tracks. John Anderson says, "...we had so much happening musically and sonically, we needed surround sound to realize the concept."

Coinciding with the 40th anniversary of the original release, "Relayer" is one of my favorite Yes albums. Taking on an intricate sound with the new addition of keyboardist Patrick Moraz, Relayer moves the listener through many parts as each of the three songs evolve. Wilson's re-mixes have given an entirely new life to these recordings. Gone are the shrilly edges with the lows filling out the bottom on what had been a heavily mid-range leaning mix before-hand.

However, as listeners would expect, it is the surround sound version that takes the cake. With the many layers to work with, a enriching 5.1 mix opens Relayer to an avalanche of aural excitement. Guitars and keyboards fall to the rear channels allowing for alternate parts to rise from the fronts while the drums, bass, and vocals hold solid ground up front. Squires bass digs deep while resonating from the subs, with Whites various drums hitting the rich roundness that they lack from earlier releases. Even that annoying tape hiss at the end of each song is gone. There is simply too many amazing surprises to the multi-channel mix to tell here, what is important is everything is more defined and cleaner,. With the Needle Drop, original mix transfer, instrumental versions, and various permutations of the new mix, the Bluray is by far the definitive release to own.

Following the previous Pangyric releases the artwork has been faithfully reproduced and presented in a mini gatefold vinyl replica card sleeve. The booklet features new sleeve notes along with rare photos and archive material.

This is a must have for surround sound fans and Yes completists. While Relayer hasn't stood as well through time, it reached the single digits on the charts, and is strongly recommended for all music fans, especially those seeking a listening experience that rivals the early Yes catalogue and helped define the progressive rock genre.

CD and Blu-ray or CD and DVD.