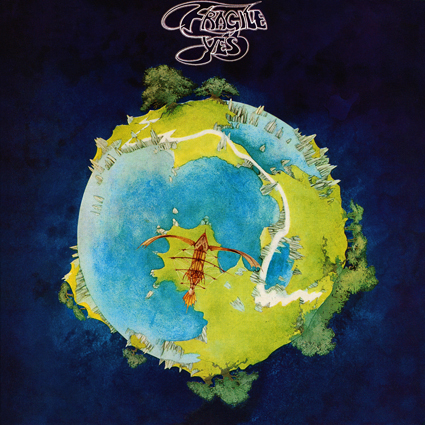 Yes continues their remix campaign with Fragile, their fourth in a series engineered by Steven Wilson which includes both new 5.1 surround sound and Stereo mixes from the original studio masters.

Even though a very good multi-channel 5.1 mix was created and available on a DVD-A back in 2002, this new mini gatefold replica package includes some compelling new features. Fans will get six extra tracks: A full mix of We Have Heaven, an early version of South Side of the Sky, a previously unheard track titled All Fighters Past, a special acapella mixed by Wilson of We Have Heaven, plus the rehearsal take of their most well-known song Roundabout, aling with Mood for Another Day, which is really the alternate take of Mood for a Day)

For those who want it all, and only for a few extra dollars, the NTSC Region Free Blu-ray is the only way to go. Both the 5.1 and new Stereo mixes are available as DTS-HD Master Audio 24-bit / 96kHz, along with flat transfers from the original master tapes of the original album mix. Exclusive to the Blu-ray fans will get a needle-drop of an original UK vinyl, A1/B1 pressing, plus instrumental versions of all new mixes, and all of the bonus tracks.

Steven Wilson has clearly shown that there was significant room for improvement over the original stereo mix as well as the 2002 multi-channel DVD. Listeners will hear a level of clarity that has been missing from all previous versions, with a musicality to the mix that seamlessly melds parts together effortlessly. The overall tonal balance lends a punch to the upper-mids giving a sizzle to the guitars and a snap and sparkle to the drums.

As is generally common to all of Wilson’s remixes, he does a phenomenal job at maintaining the character and emotion listeners are accustomed to based on the original mix. However, there are some minor subtleties that may or may not bother purists, such as the snare drum that bongs throughout Roundabout and an excessive brightness to the guitars and hi-hat on the song Long Distance Runaround.

Yet, for some it will be more than the multi-channel mix, Wilson’s 2015 stereo mix is stellar giving an entirely new life to one of the most well known progressive rock albums of all time. Sure, listeners can revert back to the original 1972 mix, which has been masterfully transferred and sounds the best I have ever heard it. The bonus material is pretty cool too, with a full version of We Have Heaven, albiet in stereo only, an alternate version of Roundabout, and a few other intriguing additions. Forget about the needle drop version, unless you enjoy hearing the very noticeable noise floor of the vinyl disc.

Personally, I had one big disappointment when it came to the differences between the two 5.1 mixes. I really found the 2002 DVD version of the song Five Per Cent for Nothing to be a stellar chaotic of criss-crossing with an overall better placement of instruments. So, I guess even Wilson has a blunder from time to time, with his remix a perfect example of a downgrade. However, the full 2002 DVD-A version is also available on the Blu-ray, check it out, let me know what you think! Of course for collectors, that old DVD is nearly worthless now, except for its unique photos that change from song to song, but we are here for the music, right?

As one would expect, the 2015 Blu-ray version of Fragile by Yes is another worthy addition to any surround sound fans collection. Of course it is required listening for progressive rock fans, and if you don’t already have it, then ask yourself why not? This reissue is a must have, period.

CD and Blu-Ray with 5.1 surround sound and Stereo mixes.  Also available as a CD + DVD-A version.