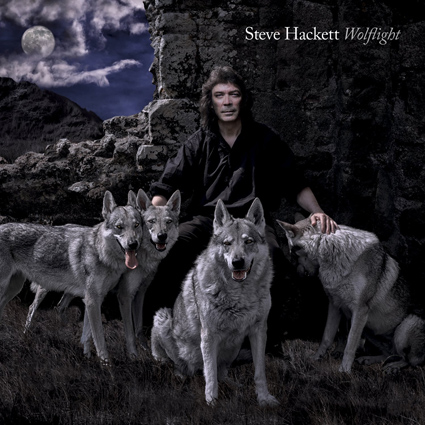 Genesis legend Steve Hackett has been back in the studio working on a new solo album titled Wolflight which was released at the end of March 2015. It is available in a number of formats including a 2 disc (CD & Blu-ray) deluxe edition which includes a 5.1 mix, or fans can download a 24 bit / 88.2 kHz FLAC which includes the 5.1 surround mix. A gatefold 2LP vinyl version is also available for analog enthusiasts, and it includes a CD with it too

The tracks take the listener through a journey in space and time looking at the different faces of the endless fight for freedom. Wandering between parallel universes, Hackett explores contemporary and ancient cultures, from Greece (Corycian Fire) to the Far East (Wolflight), the USA and Martin Luther King (Black Thunder), but also his very own childhood memories (The Wheel's Turning) and the unresolved drama of domestic violence (Love Song to a Vampire).

Like all great prog releases, Hackett tells a story within a dozen songs that are thematically tied together, acting as one long piece broken into multiple parts. Using cinematic style orchestration, progressive rock searing guitars, acoustic classical influences, and the infusion of traditional world music, Wolflight provides over 60 minutes of engaging music. I consider this one of his better releases, and was delighted that a high resolution surround sound version was available.

Taking much of its cue from surround mixing for movies, Wolflight is a very front channel focused 5.1 mix, with ambience and second parts occasionally appearing in the rear channels. A nice use of surround is evident on the title track Wolflight where the backing vocals are slightly delayed in the back, likewise the ghostly delay of vocals on the following track “Love Song To A Vampire” really starts to immerse the listener. Given the dense layering on this release, I am certainly disappointed by the minimal use of the back channels. Of course this is a stylistic choice, for which I favor the immersive use of the entire sound stage when presenting a surround sound mix.

One of my favorite tracks, “Black Thunder” is rhythmically a strong song that evolves with a brilliant guitar solo harnessing the depth of the sound stage. This is by far one of the most vibrant and rich electrified guitar solos I have heard, with great use of feedback.

Musically I find this album to excel, yet the overall sound quality is not perfect. I immediately noticed an overbearing bass, especially prevalent from the sub-woofers. While each part is distinct and warm, those who like a sparkling top end will find it somewhat lacking in the higher frequencies. To be clear, for me these are not complaints, rather observations. Even while I am not a fan of the overall mix, the surround sound version is very appealing, and certainly worth the price of admission. Ironically, the hi-res stereo version solves much of the heavy bottom and the light high end issues. Excepting the spatial ambience, the stereo version will likely be the go to version given its slight (yet important) differences in overall sound quality.

For fans of Steve Hackett, those who love early Genesis, and listeners seeking more of the classic progressive sound, Wolflight is highly recommended. Surround sound enthusiasts be aware that this is far from a reference disk, and for those who prefer an immersive surround experience, this really isn’t the one, however the hi-res stereo track is very good, and overall this release currently is offered at a very reasonable price.