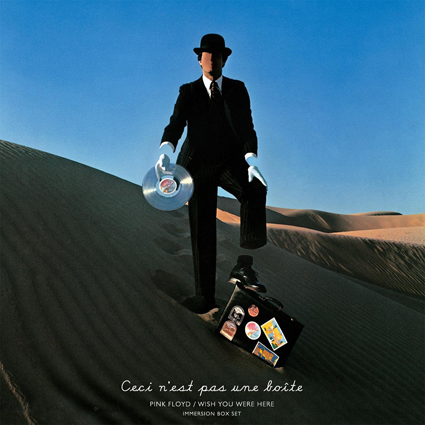 Fans will be delighted with this lavish reissue of Pink Floyd's 1975 Wish You Were Here album, which topped the album charts in both the UK and the US. Containing the classic cut Shine On You Crazy Diamond, a tribute to founder member Syd Barrett, the Immersion version features the classic Studio album mixed in surround sound and digitally remastered. This limited edition high quality box set features rare and unreleased audio and video material, plus a new 40 page oversized perfect-bound booklet, a book of original photographs edited by Jill Furmanovsky, exclusive merchandise and facsimile collectables. Released November, 5, 2011.

Audiophiles will find the reason to purchase the set is all on disc five. This disc includes all the audio and visual content from the 2 DVDs, featuring the 70's quad mix and the new 5.1 surround mix by James Guthrie, along with the 2011 remastered stereo mix in 96kHZ lossless. There are vast differences between the quad and surround mix, and the remastered stereo has some spatial subtleties that truly make this classic album shine on..

Compared to the classic stereo mix, the quad version takes some creative liberties, and lacks some musicality found on all the other mixes. This mix feels dryer and spreads instruments very wide, leaving some wholes but also providing wonderful separation among the various instruments. A significant extra appears between Have a Cigar and Wish You Were Here, with a few bars added to the guitar solo after it has been compressed to the range of an AM radio. Likewise the transition when starting to change stations is very smooth. Apparently these bars were left on the cutting floor in the original stereo mix. We noticed the guitar solo is so subtle during the break between the versus, and the synths are somewhat louder, that this section doesn't carry as well as the other mixes. We absolutely enjoy the swirling movement of the synthesizer during WYWH Part 6, however, we really here the wind as cheezy analog synths, which is not nearly as apparent in all the other mixes. Likewise, the synths during WYWH part 9 come across as dry, lacking depth in the mix. Yet, we also appreciate the movement of the buzzing shimmer that slowly brings the listener down at the end of this incredible album.

For us, it is the 5.1 surround mix that makes this whole set absolutely worth owning. James Guthrie has taken the original stereo mix and created a fantastic surround sound experience. Unlike the quad mix, instruments are spread evenly and the whole sound stage is filled. There is no harshness, which is apparent in the quad mix, and the ambience matches the stereo mix with perfection. We really like the transition between WYWH part 5 and Welcome to the Machine. The sax solo is pushed out of the way and the rumbling of the machine comes in from the left rear speaker. The sax continues to move off to the front right and becomes more distant fading to the right back. The acoustic guitars and synths alternate left and right with an incredibly rich low end that cycles like the sound of a helicopter. The use of movement as the transmission locks into place is far superior from both the stereo and quad mixes, and the transition to the audience at the end is extremely smooth. While we miss the broad swirling of the synths during WYWH part 6, we are ecstatic about the bass that slides in with drum hits at the start of this part. The wind during part 6 literally sounds real, while the closing section, WYWH part 9 becomes spacious lacking the buzzing sensation found in the quad mix.
The concert film segments far surpass the quality of the Dark Side of the Moon films. We especially like the animated film that is the backdrop to Welcome to the Machine. We skipped listening and watching the two DVD's, but did throw in the CD 2, which includes various live versions and alternate takes from both Wish You Were Here and Animals. Listeners will likely find the version Raving and Drooling to be an interesting predecessor to the actual album version of Sheep. Yet, even more Intriguing is the live version of You've Got to Be Crazy, which is an alternate version of Dogs. A hastened singing of the intro and ending verses truly represent how several incarnations of a piece are written, before a final version was actually recorded for their upcoming album Animals. The alternate studio versions of both Have a Cigar and Wish You Were Here each have several minor differences. Taking a cue from folk music, Stephan Grapelli's fiddle is up front for the solos on the title track.

The extras except the books are simply worthless. Maybe there is a use for the table-runner, the clear marbles will just get left in the bag. For those who didn't make the concert tour in the 70's, I really don't see a reason to have facsimile ticket stubs either. For the beer drinkers, the coasters are fun, but will likely be trashed in short order. This leaves the books, one which includes pages of great artwork and other one includes photos of the band It is great to see the original postcard expanded over two pages, among other alternate versions of images that came with the original album release.

Fore fans who wish to immerse themselves with this lavish collection, we highly recommend this box set. Although we consider the box size to be annoying, and the extras to be essentially junk, we are still excited to have this in our collection. For those wishing to obtain just the 5.1 mix, we recommend the Analog Productions Hybrid SACD multi-channel release, selling for about 60% less than the immersion box set. Although we don't have a copy of the SACD, we have full faith that this format is equivalent to the Bluray version.

Wish You Were Here digitally remastered by James Guthrie, 2011