Hawkwind - Warrior on the Edge of Time - DVD 5.1 surround review 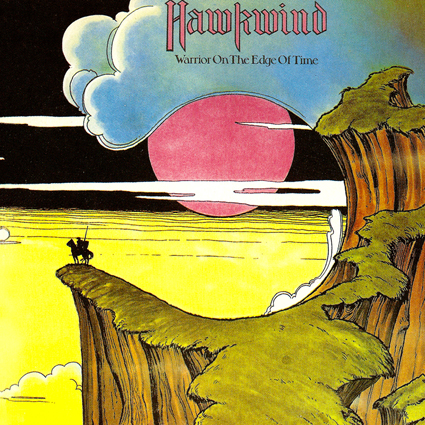 Take your progressive rock journey into the realm of psychedelic and art-rock with the long awaited deluxe edition of Hawkwind's classic 1975 album, "Warrior On The Edge Of Time."  This edition marks the first time that the original analogue stereo master tapes have been used for a remastered edition. The set also features a 5.1 surround sound remix from the original 16-track master tapes by Steven Wilson, who has also provided a new stereo remix. The deluxe version reviewed here also includes thirteen bonus tracks drawn from studio out-takes and the 1975 Watchfield Festival and a booklet featuring photos, memorabilia and an essay. The surround versions are presented in three formats; MLP Lossless 5.1, DTS 5.1, and Dolby Digital 5.1, along with an MLP Lossless new stereo mix and a flat transfer 24/96 original stereo mix

Loosely based on Michael Moorcock's 1970 fantasy novel "The Eternal Champion," with lyrical and vocal contributions from the author himself, Warrior is an excellent example of musical evolution during the 1970's. At the time of this release, progressive rock was in its hay-day, with bands like Yes, ELP, and Genesis featured on progressive radio.  Hawkwind leaned toward hard rock, a splash of psychedelic, and edging into metal.  Not exactly progressive rock, but often lumped into that genre and could be considered a heavy version of Pink Floyd.

The listener is immediately immersed with the opener "Assault & Battery," awash with phased Mellotron which takes the rear channels, over a mighty dual-drummer/Lemmy rhythm section that starkly stands out in the front channels, and layered with weaving flute melodies.  Brock's fiery vocals command from the center channel and emanate out to the back as he quotes portentous lines from Longfellow   This all transitions into the instrumental track "The Golden Void," which is just a warm-up of what's to come.

Mixing engineer Steven Wilson truly demonstrates how surround sound can be used effectively to immerse and engage the listener with his studio magic on "The Wizard Blew His Horn."   Cymbals crash around the four main channels, while vocals spread from the center channel bouncing around as the reverb decays.  A synth note rotates around the soundstage, and other elements aid in the overall balance of the surround mix.

But, for surround sound fans,   "Opa-Loka" is an awesome return to swirling elements, and shifting synths, among other mixing treats.  The propulsive rhythm carries synths between channels, moving from front to back, along with phasing that opens the spacial field from a narrow point to a wider placement in the mix.  Chirping synths flock from the rear and a wave crashes forward as the piece comes to and end.

"The Demented Man" proves to be a touching acoustic ballad that has a Pink Floyd feel, and a style snagged later by Wilson's own Porcupine Tree.  The mix becomes more conventional with acoustic guitar and vocals in the center channel, while synths take the rear channels.  Additional vocals are up front, along with flutes.  However as straight forward as the mix sounds, it is a wonderfully balanced piece.

Considered one of the bands crowning achievments, "Magnu" is an intense space rock piece with a grinding proto-metal riff.  Drums and bass hit strong from the front channels , while the rest of the expansive soundscape becomes increasingly alive with violins, snaking saxophone, and electronic hypnosis. For over eight minutes the listener rides an intoxicating onslaught of melodies coming from all directions. This is not relaxing head music; instead it is tense turbulent material that staunchly refuses to be relegated to the background.  The remaining tracks continue in the same varied vain, adding to the depth of the story.

While opinions are sure to differ widely, the stereo remaster provides a welcome new life to the music that always demanded impeccable sound quality. With apologies to purists, Steven Wilson's remix respectfully draws out previously submerged nuances and gently boosts the high end. This opens up the overall mix, resulting in a more airy ambience that suits the material perfectly,

The bonus tracks are a slight disappointment. Even the hardcore will likely find alternate versions of the controversial spoken word pieces and bootleg-quality 1975 live recordings are only worth a listen or two.  Accompanying the two CD's and DVD-Audio disc, the box set includes an illustrated booklet featuring a new Brock interview where previously obscure nuggets of trivia are revealed, all housed in an attractive clam shell box featuring the original front cover artwork. Overall, the whole package is more than worthy of such an important album in the Hawkwind discography. Highly recommended to established fans and the casually curious alike.