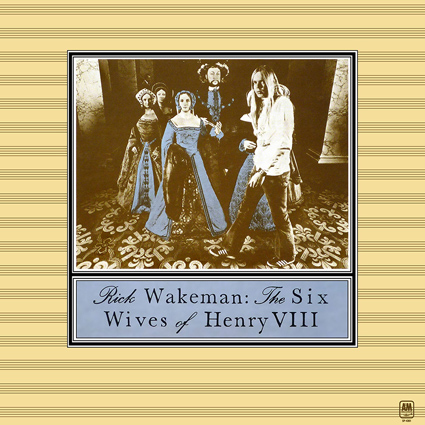 Quad is back in fashion, and Rick Wakeman's most successful album “The Six Wives of Henry VIII” was reissued as a deluxe edition on February 2, 2015.

The CD/DVD features new quadraphonic mixes and stereo mixes which were remastered at Abbey Road. New packaging has been created, and this reissue is also available as a standalone CD, Vinyl LP and in digital formats.

Selling over 15 million copies worldwide, The Six Wives of Henry VIII was Wakeman's debut studio solo album and hit the Top 10 UK album charts. Reflecting on Wakeman’s popularity, one must wonder where has all the great musicianship gone in popular music today. Thankfully high resolution enthusiasts are keeping fantastic music like this alive.

Undoubtedly hi-res enthusiasts will be enthralled with this release which boasts a 24 bit / 96k Quad mix in both LPCM Lossless and DTS. Neil Wilkes mastered the album at Opus Production with excellent clarity, bringing to life the fantastic balance of the new multi-channel mix. The low end is full, yet not over powering, while the mids are smooth and detailed. There is a crispness at the top that gives a nice snap to the snare drum and a pleasing sizzle to the top ranging synthesizer parts.

Listeners will find themselves immersed with the sound stage of the Quad mix, with keyboards and organs coming from all directions. Bill Bruford hits the drums broadly across the front channels, with plenty of ambient energy on the track “Anne Of Cleves.” However among all the brilliance, tape rumble can be heard in the gaps and softer parts, a reminder of the shortcomings of analog tape.

There seems to be a very subtle difference between the LPCM Lossless and DTS 24/96 Quad versions, and while I can’t explain it, I ended up liking the LPCM version better. I didn’t even bother with the Dolby Digial version, and strongly advise listeners who haven’t yet upgraded, that this and other high resolution releases are totally worth having the equipment that can play LPCM and DTS MA.

I didn’t find the stereo version compelling, as the Quad mix was clearly less muddled and offered the discrete depth of the additional two channels. The rich church organ on the fourth track “Jane Seymour” certainly shows this off with the round lows filling the rear channels and the arpeggios and chords up front. I truly felt like I was sitting along side Wakeman as he played this magnificent piece.

Along with the complete original album, you’ll get a Video version of Wakeman’s BBC TV performance of “Catherine Howard” albeit in stereo audio, and two more bonus tracks on the CD.

All in all this is a very strong release, and a must have for any Rick Wakeman fan. Surround sound enthusiast will be stunned by the Quad mix and probably find they will place it in regular rotation. Wouldn’t it be great if every hi-res fan bought this and the Quad version became at least Gold certified? Surely we would move closer to surround becoming the standard!