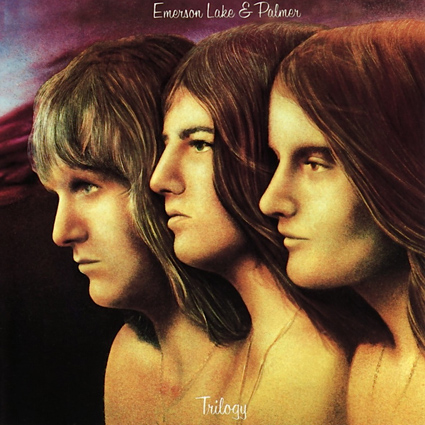 It appears that Emerson, Lake and Palmer paid attention to fans after their overzealous super deluxe release of Brain Salad Surgery. The band and label are giving fans what they want most with their 1972 album Trilogy, which was released as a deluxe 2 CD and 1 DVD-A version in early May 2015.

King Crimson’s Jakko Jakszyk has taken the controls again for the all new hi-res 5.1 and stereo mixes which also includes a previously unheard version of From The Beginning. The deluxe set returns to the customary digipak that includes a 16 page booklet with new liner notes and photos.

Blending their first two records together, Trilogy provides a magnificent journey from acoustic folk to futuristic jazz, onto their classical progressive roots. Considered by many to be their best work, it is a pleasure to get this well regarded progressive rock classic album remixed in surround sound and hi-res stereo.

Make your selection of either MLP 24bit / 96kHz 5.1 Lossless or DTS 24bit / 96kHz 5.1, and take your seat for an amazing ride. Carl Palmer’s drums rush around you, while Keith Emerson’s Hammond Organ, Piano, and of course the Moog penetrate from all corners of the room. Greg Lake’s vocals are placed up center with his bass emanates across all the front channels filling out the bottom in the sub-woofer.

One of their most well-known songs “From the Beginning” floats from the front to back channels with a warm reverb which provides nice depth to this acoustic guitar focused piece. While the primary energy is firmly up front, the back channels offer a pleasant surround addition with secondary organ and ambient reflections.

“Hoedown” is a masterful surround experience demonstrating the mutli-channel mixing skills of Jakko Jakszyk. With the many parts hitting the listener from all directions, none weigh heavily, leaving plenty of room for each part to easily be heard. This continues to be evident throughout the remainder of the album, which features a clean and dynamic sound.

I preferred the MLP 5.1 Lossless when compared to the DTS 5.1 version. I sensed greater transient peaks along with a slightly more open soundstage while listening to the MLP 5.1 Lossless codec. The real challenge is the determination of which stereo mix to call my favorite. There are some significant differences in the two mixes, along with a huge noise floor reduction found on the 2015 version. In fact, the tape noise is literally unbearable on the Original Stereo Mix, and this has been cleaned up greatly, but there is a resounding punch that is lacking on the re-mix. Additionally, the 2015 mix has an overall wetness not heard on the original mix. This subtle, yet critical change to the overall sound effectively repaints the tapestry with a new aural quality. Each have their benefits, the downside is when you know an album so well that even the smallest of changes can mean the world. However, I admit that regardless, I am still a sucker for a great sounding surround mix, which in of itself is a re-imagination of the original masters.

So just a bit after the 50th Anniversary of the Emerson Moog Modular System, the synthesizer that changed and inspired the world of music forever, we get a fantastic 5.1 version of Trilogy to enjoy. Hands down, this is a must have for Emerson, Lake and Palmer fans, and surround sound enthusiasts will be delighted with the wonderful multi-channel mix. Emerson, Lake and Palmer is required listening for lovers of Progressive Rock, and their 1972 Trilogy album is simply mandatory. The great news, it won’t break your wallet to include this in yor collection.