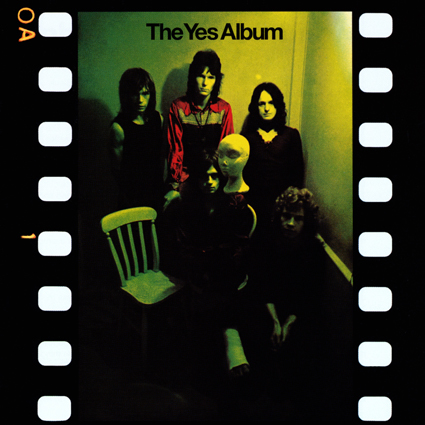 The Yes Album has received the surround sound treatment on Blu-ray and DVD-Audio, all sourced directly from the original multi-tracks by mixing engineer Steven Wilson and approved by the band. Packaged in a mini vinyl replica gatefold card sleeve that includes rare photos and archive material.

Containing progressive rock classics including: Yours Is No Disgrace, Clap, Starship Trooper, I've Seen All Good People, A Venture, and Perpetual Change, the Yes Album features an amazing lineup of musicians. There is Jon Anderson playing percussion and vocals, Bill Bruford hitting the drums and percussion, Steve Howe playing both acoustic and electric guitars, along with singing vocals, Chris Squire rounding out the bottom on bass, and vocals, Tony Kaye on organ, synthesizer, piano, keyboards, and Moog, along with Colin Goldring on recorder.

Like other Wilson remixes, there is a new stereo album mix on the CD, plus a bonus studio version of “Clap” and an extended version of “A Venture.”  The Blu-ray contains a 5.1 PCM Surround Sound and 24bit 96khz High Resolution Stereo mix. Also a flat transfer of the 1971 album mix from the original stereo master tape in  24bit/192khz, and a 24bit/96khz  transfer of a needle-drop of an original UK vinyl A1/B1 pressing. Bonus material includes a complete alternate album running order drawn from live tracks, an extended mix, ingles and other edits. Plus Karaoke fans can sing along to the instrumental versions of all new mixes in stereo 24bit/96khz DTS-HD Master Audio.  The Blu-ray is NTSC-0, LPCM playable in all Blu-Ray players & Blu-Ray drives.  Note: the DVD version excludes several items from above.

The expansion from stereo to surround for this album is absolutely fantastic.  Avid fans will surely know how much movement is in the original stereo mix, especially with guitar parts that accent from the left and right speakers, or the slide across the stereoscape as Howe slides down the fretboard on “Yours is No Disgrace.”  Placing these classic progressive rock pieces into a surroundscape takes the Yes Album to an entirely knew level.  Parts dance around the room in a quick call and response manner, jostling from the rear left, to the front right, and the front left, to the rear right, or any combination of accentuated movement within the mix.  Howe’s prominent slide on the guitar moves from the left rear forward, and then once again from the right rear forward.  Voices emanate from the center channel and spread across the sound stage to the rear channels.  In typical Wilson fashion, Anderson’s vocals reflect off the rear channels giving his voice plenty of space from the center channel origin.

Choosing between DTS Master Audio and LPCM surround yields an apparerent difference between a pleasant analog feel or the top end sizzle heard on the LPCM version.  Also, on the DTS-MA version the bass grumbles a bit more than the original mixes, showing off the deep resonance of Squires bass, this is not as apparent on the LPCM version.  And back to the DTS-MA version, even the kick drum has a real thump that penetrates through the mix, which is most evident on “Your Move” the first part to “I’ve Seen All Good People.”   I can’t even begin to tell listeners why there is such a vast difference between the LPCM and DTS-MA versions, other than it is possible that the actual bit and sampling rates are not the same, since in theory if they were, the output should be bit identical, thus should yield the exact same sound.

Listening further, The Yes Album has plenty of parts to fill out the surround mix, from multiple guitar parts placed in the front and rear channels, to Kaye’s keyboards filling out what might have otherwise been a gap.   Dynamics have been improved characterized by the snap of the snare, and rhythm hits on the guitar, and of course the most evident organ transition between the first and second parts of “I’ve Seen All Good People.”

Checking in on the original stereo mix and the needle drop are well worth the listen for fans of this classic album.  I appreciate the slightly warmer characteristics on the needle drop, but like the channel separation a bit more on the flat transfer.  Wilson’s new stereo mix adds more bottom and snap, but loses a bit from the top, which I heard as less edge from the cymbals.   An additional gem for musicologists  is the Alternate Album which includes live versions of a few of the tracks along with a studio take of the Clap.

Overall, this is simply a no brainer for any surround fan, it is a must have.  Not only is this a classic album, overall I feel the surround mix is effectively flawless.  Listeners who don’t already have a surround sound system, this should surely push you to get one!

Compact Disc and either a Blu-ray or DVD-Audio containing a 5.1 surround mix.