Gentle Giant - The Power and the Glory - Blu-ray 5.1 surround review 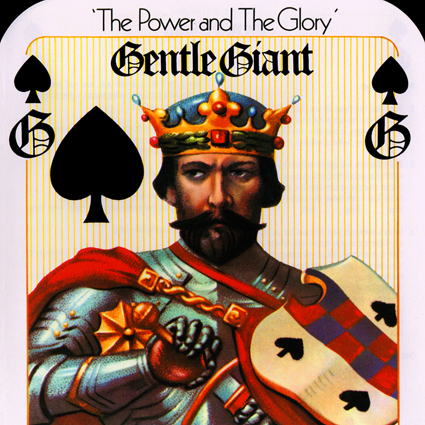 Gentle Giant followed up their acclaimed album In A Glass House with The Power And The Glory, which now has been released as your choice of either aCD / Blu-ray or a CD / DVD edition featuring new stereo and 5.1 mixes by Steven Wilson, along with a flat transfer of the original mix, plus instrumental mixes of the album and two bonus tracks.

The new mixes for CD and surround sound contain the following tracks: Proclamation, So Sincere, Aspirations, Playing the Game, Cogs in Cogs, No God's a Man, The Face, and Valedictory. Plus bonus tracks: The Power and the Glory and Aspirations (out-take). The NTSC-region 0 Bluray includes the full Album with Videos in either 24bit / 96k Stereo LPCM or DTS 5.1 Master Audio.

Delving straight into the surround mix, I find the Power and the Glory to be one of the finest Wilson has done from an overall perspective. Stunning sound quality is accompanied by an excellent balance between simple rear channel ambient information and some stuff flying around the room. A characteristic of Wilson' surround mixes is to spread the reflections and echoes that you would hear off the rear and side walls among the surround channels. This is done with great measure here, keeping as faithful to the original stereo mix, while also creating a new soundstage for the multi-channel mix. Then for some snazzyness there are some 5.1 fireworks, with distinct guitar and keyboard parts emanating from the rear channels, along with some nice spatial separation.

What is lacking, and originated from the original multi-track studio recordings, is an extremely flat and flabby drum sound. While the tom-toms are spread nicely across the front channels, the acoustics of the drum booth cause the kit to sound really boxy. They can become a bit overpowering in the mix, and somewhat degrade from the overall enjoyment of the album. Having said this, during the era of these recordings it was not uncommon to hear drum kits recorded like this. In high resolution, and certainly in surround, it just becomes more apparent that they are a weak part in the overall mix.

Both the Blu-ray and DVD versions contain animated videos with the lyrics that play with the music. These are done very tastefully and complement the music very well. Of course if you don't want to see the videos, just turn off your monitor! Hats off to musicians Gary Green on guitars, Kerry Minnear playing keyboards, cello, and singing vocals, Derek Shulman on vocals and saxes, Ray Shulman hammering out the bass, violin, and vocals, and John Weathers hitting the drums, percussion, and singing vocals Power and the Glory is a fantastic album worthy of inclusion in any progressive music lovers collection. Let's hope this reissue series continues with "In A Glass House," my personal favorite!

Strongly recommended for surround sound and high fidelity audio enthusiasts, along with fans of Gentle Giant and prog rock.