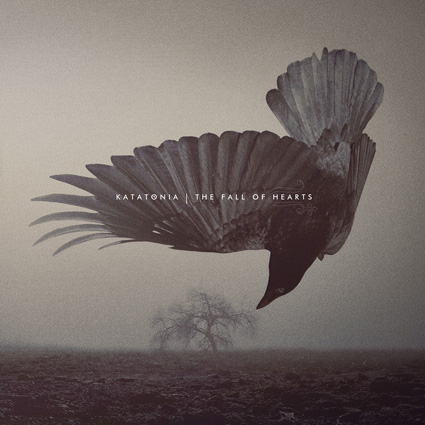 The past couple albums from dark progressive band Katatonia have seen them stepping into the multi-channel spot light. Their tenth studio album “The Fall of Hearts” continues this trend while expanding their musical boundaries. Their album “The Fall of Hearts” is released as a deluxe CD and DVD set with DTS 24bit / 96kHz 5.1 surround along with hi-res LPCM 24/96 stereo audio mixed by Bruce Soord,

Featuring their new drummer Daniel 'Mojjo' Moilanen and recently recruited guitarist Roger Ojersson, Katatonia is opening the door to their next incarnation. Available as a media book edition with a 24-page color booklet, featuring dramatic artwork created by long-time design collaborator Travis Smith, all at a very friendly price.

Surround enthusiasts are sure to love the full mix that hammers the heavy guitars from front to back channels. There is plenty of distortion to satisfy the metal head, but so well recorded that listeners should not find themselves fatigued after thrashing to the Fall of Hearts. Bass guitar is solid holding down the bottom with intense vigor, while drums find rhythms that seem near impossible to count. Snare hits are rich in the front center channels, with the kick drum pumping throughout, and the remainder of the kit spreading across the front channels.

Opening with “Takeover” the band hotwires a riff sending it wildly spinning, allowing Jonas Renske to dig deeper into a well of emotions. Teetering between progressive metal and post rock, Takeover sets the tone for the remainder for the Fall of Hearts. The 5.1 mix lives and breathes, with the rear channels discretely used for backing vocals and additional guitars, whilst the front hits out the rhythmic backbone on this track.

The third song “Old Heart Falls” cools down with subtle synth washes building over arpeggiated keyboards, with the rear speakers percolating atmospheric flourishes and ghostly pre-echoes of the main vocals. This dreaminess is carried forward to the next tune “Decima,” a progressive piece that is wonderfully melodic.

But just as you have settled in with the lush surround-scape, the next song “Sanction” crushes the listener with one of the heaviest openings they have written in years. Thir axes chop through the front channels with ethereal synths haunting from the rears. Great use of dynamics make this a perfect demo track scaling down to subtle verses, and then the guitars kick back in with thunderous drums hitting hard. Meanwhile all channels are firing making it clear that this is an aural masterpiece which must be added to any multi-channel collection.

As we pass the middle of the album, the sixth track “Residual” mellows out and Soord’s impressive surround mix absolutely brings the song to life, with guitars mystically gliding behind the listener, riveting vocals up front and harmonies in the back right channel, along with some delicate percussive elements emerging in the back left.

Building from a solo piano that spreads across the soundstage to a piece of searing intensity, “Last Song Before the Fade” is a prog-epic that takes advantage of the surround channels to maximize the separation of the choral like parts from the magnum riffs that command the track. Keeping with modern mixing standards, bass and drums remain up front throughout the majority of the 5.1 mixes.

Revealing their love of 70’s prog, the very progressive “The Night Subscriber” continues with orchestral sounding Mellotron tones paired with jazzy drumming and explosive crunchy guitars. By far my favorite song, this alone is worth the price of admission on this absolutely rich and perfectly mixed album which provides the listener with a fantastic multi-channel experience that ebbs and flows magnificently.

Rounding out the package at the tail end is one bonus track “Vakaren” which is oddly mixed in stereo only, yet possibly mixed this way on purpose. Sung in Swedish it has been augmented with an overt electronic edge compared to the rest of the release. Yet its stereo presentation helps to define just how integral to the album the enveloping surround mix actually is, leading one to wonder why someone would listen any other way! Of course, the entire album is available in lossless 24bit / 96kHz stereo, which appears to be slightly brighter and naturally a denser mix. I didn’t bother listening to the Dolby AC3 5.1 layer, since the DTS 24/96 5.1 is technically a much better version.

While there is an unexpected energy to the Fall of Hearts, there is also a lovely balance between prog and metal. Some believe “Fall of Hearts” is their masterpiece, yet regardless of the various opinions, this is undeniably a remarkable effort and boasts a killer surround mix. This is a must have, especially for surround sound enthusiasts, progressive and metal fans, and of course anyone who has followed Katatonia over their illustrious career.