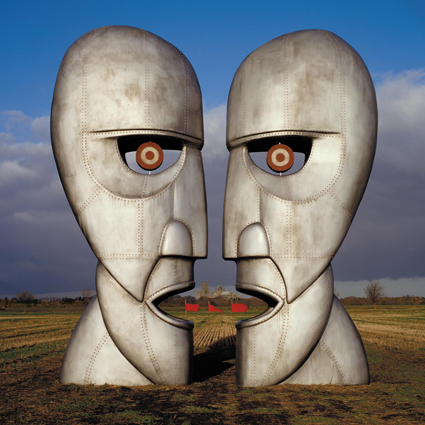 Should fans rejoice or proclaim their displeasure of the 20th anniversary box set of the Division Bell by Pink Floyd. This seven disc set includes a newly remastered two-LP edition of the album directly from the original analogue tapes. It has been expanded to include all the full length tracks that were edited down to fit on a single LP with cover art by Hipgnosis/StormStudios, and is presented in a gatefold sleeve.

So far the set is more of a vinyl enthusiast's dream, which also includes a red seven-inch vinyl replica of the single Take It Back, along with a clear seven-inch vinyl replica of High Hopes, and a twelve-inch blue vinyl replica of High Hopes in a reversed laser etched design. Finally the digital content includes the 2011 'Discovery' remaster on CD and for the high resolution fans, a Blu-ray disc which includes The Division Bell album in both high definition stereo, plus Andy Jackson's previously unreleased 5.1 surround sound audio mix of the entire album.

Bonus material includes a new video for Marooned which has been directed by Aubrey Powell at Hipgnosis, in both stereo and 5.1 audio. Of course there are also the little extras, like art prints and posters. Yippee.

Frankly, at current prices, this set probably has had a difficult time getting out of the gate. Only die hard deep pocketed fans will be willing to spring for a box that contains discs that they will rarely (if ever) play. I'll speak directly to the music executive when I say, consider this: a two LP heavy weight vinyl version should be no more than $30, and likewise the Bluray disc should be no more than $25. That is $55, well below the current price of $130 US on Amazon. Seriously, where is the other $65 in value?

But if you are willing to shell out the big bucks for the surround sound mix or the audiophile vinyl, at least you will receive an excellent quality product. In fact, you'll even get a bonus download in lossless 24 bit / 96 kHz stereo Wave file of the complete album in a huge box filled with the vinyl, really nice booklets containing all the words, and the other extras. Sorry, there are no marbles or scarfs.

From an audiophile perspective, it all comes down to sound quality. The Division Bell excels in this area, and mixing engineer Andy Jackson has been a hidden gem in the 5.1 arena. The album gently opens with Cluster with synths swelling up from corner to corner. Nothing is overpowering within the mix, giving ample room for each instrument to breathe and speak its part. When flattened down to two channel stereo, the mix becomes a bit cluttered with parts stepping on top of one another, loosing much of the clarity found in the multi-channel surround mix.

As the album seamlessly continues, the ebb and flow of parts moving and swelling up from the rear and front channels take the listener on an aural journey and are best heard on the track Poles Apart. Gilmore's guitar extends across all channels, echoing and decaying around the entire sound stage. I absolutely love the way the guitars glide in from the rear channels while the sax solos at the start of "Wearing the Inside Out," and echo from side to side in the front channels slapping off the rears during Gilmore's solo.

The overall sound quality is extremely smooth with no brittle edges or overbearing bass parts. Drums are nicely mixed in with remaining instruments and vocals fall just as they need to. It is a very analog feeling in the digital domain.

But still, I truly wish the Blu-ray had been offered as a separate disc, as I see little reason to play the vinyl when I have a high resolution surround sound choice. And what am I going to do with a 45 single? Barring this complaint, the Division Bell is a worthy addition for fans of Pink Floyd and surround sound lovers. While this is not considered one of their best works, the audio quality is excellent, and still a nice listen. Having never owned this before, I have found the music continues to grow on me.

Adendum July 2015:  A stand alone DVD has become available of the Pink Floyd Store site at least three times since this writing.  These limited runs sell out fast, so for those seeking a stand alone keep your eyes open for these occasional releases.  Of course, they could stop producing them at any time.

2 LP expanded version of album, 3 7 inch singles, a CD, and a Bluray Audio with stereo and surround sound.