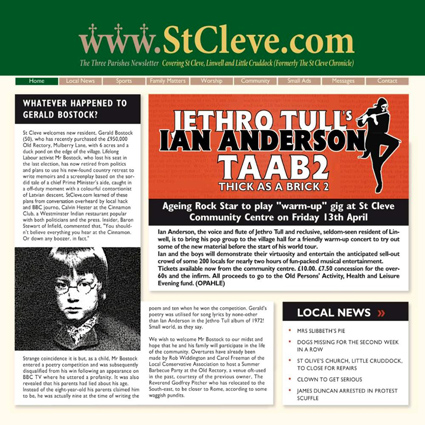 Marking the 40th anniversary of Thick as a Brick, Ian Anderson asked himself, what would Gerald Bostock - aged fifty in 2012 - be doing today? What might have befallen him? Thus, Thick as a Brick "part two" album examines the possible different paths that the precocious young schoolboy, Gerald Bostock, might have taken later in life. Anderson wrote song-sections that were identities illustrating the hugely varied potential twists and turns of opportunity and fate. These could easily echo how our own lives develop, change direction through chance encounters, however insignificant they might seem at the time.

Jumping into the follow up to the classic Thick as a Brick, it isn't hard to notice how Anderson's writing has changed over the past forty years.  TAAB2 is much more akin to the writing styles of Dot Com and Heavy Horses.  The recording is absolutely crystal clear and while filled with depth and dynamics, it actually sounds somewhat sterile.  The spirit of both the performance and live feel of the original TAAB is greatly missed on this follow up.

Simply put, TAAB2 does not measure up to its younger self.  However, there's lots of Anderson's great flute playing. Lead guitarist Martin Barre has been replaced by the young and amazing Florian Opahle who  fills Barre's shoes admirably. The rest of the band is stellar as well: John O'Hara plays the piano, hammond organ, and keyboards, with David Goodier on bass and glockenspiel, along with Scott Hammond on drums and percussion.

The surround mix generously places the band around the four speakers, with Anderson's vocal in the center channel.  As is common on most other surround mixes that Steve Wilson has done, the drums and bass are up front with rhythm and melodies spread to the sides, and secondary instruments placed in the rear.  The wetness of spatial depth is spread to opposite speakers, and is especially noticeable at the start of the album with the piano.  Anderson's voice is warm and other than occasional tricks with effects, appears close and moderately dry.  All of this helps present a sensationally clear mix.

While the album musically doesn't match any of Jethro Tull's classic 70's releases, it is a well written and pleasantly flowing work.  There are both heavy and folky sections.  A favorite is the song "A Change of Horses," which starts with a traditional English sound, and pushes into a contemporary celtic piece that takes cues from bands like Wolfstone and Tempest.  Leaning on the metered style of both fusion and progressive rock, there are several remarkable instrumental passages that really make this album shine.  Only in the last minutes of the album is there any musical resemblance to the original Thick as a Brick, as Anderson sings out "Thick as a Brick 2."

Unfortunately, the music is broken up in a few places by spoken phrases, which lend well to the story, but detract from the music.  Listeners will want to keep their video monitors on while spinning the DVD-V disc.  Lyrics are displayed along with occasional pictures, making it easy to follow along.  Also visit the Videos section for the Reading of the Lyrics, Interviews, and Making of TAAB2.  Put the DVD in a computer and find some PDF files of the fake St Cleve site that this album uses as analogous to the original album's fake newspaper, as well as PDFs of the lyrics in various languages.

Only available on the Special edition is an audio-visual DVD with 5.1 and stereo mixing by Steven Wilson, a 16-page booklet, videos covering the making of the album, interviews with the musicians and a lyric reading by Ian Anderson.  Released: April 3, 2012.

Audio CD and a DVD-V with 5.1 surround sound mix. Also available on Vinyl.