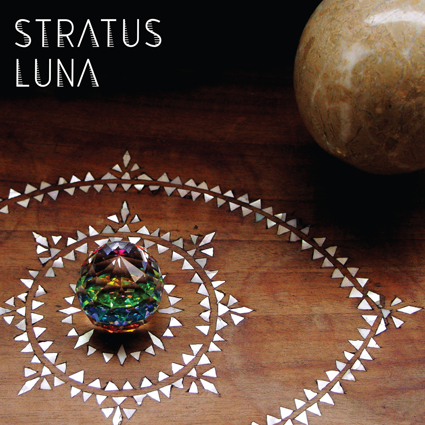 Brazil may be known for its Latin beats, however the band Stratus Luna presents a new sound from the land of the Amazon. As big as its forests, the group takes on a post rock, progressive, and fusion sound that emphasizes high voltage listening in high resolution audio from the Brazillian MusicMagick record label.

This very young post-rock band from São Paulo, Brazil defies any preconceived thoughts about the mature capabilities of four kids who are merely 17, 18, 20 and 21 years old! Multi-instrumentalist Gustavo Santhiago (20) plays keyboards, flutes and sitar, with his older brother Ricardo Santhiago (21) riffing on the guitars. Their buddies Gabriel Golfetti (18) doubles down on bass and keyboards, while Giovanni Lenti (17) hammers out the rhythms on drums and percussion.

Drawing from a variety of contemporary styles, it is easy to hear progressive and fusion leanings that have a very direct instrumental post-rock feel. Even psychedelic rock, traditional Brazilian beats, plus eastern music all find their way into the mix.
Now that you are hooked into their style, we will dig into the sound over this seven track release. The ominous opening is powered up by a large organ patch overlaid by keyboards that evoke the opening of the Who’s “Baba O'Riley” as keyboards are panned back and forth across the stereo-field. Bass and drums solidly kick in filling out the composition, adding depth and dynamics to the piece. Guitars take on a multitude of sounds from edgy rock to a smooth jazz feel.

There is a central focus to the mix with a accentuated hump that pushes the bass part forward, grinding toward the bottom. “O Centro Do Labirinto,” the second track, heads into the progressive realm with some cool time signatures at the start leading into effect driven searing guitar solo and parts that drive the song from section to section. The keyboard parts are distinct and glide easily across the spectrum of this 24-bit / 48kHz stereo download that has been mixed by Alex Angeloni and mastered by Fabio Golfetti.

Drums parts are full, with a rich sounding snare that snuggly fits into this guitar and keyboard weighted mix. I really like the analog buzzy envelopes of the synth parts at the start of the third tune “Zarabatana.” The overall recording is clean, making it easy to hear the nuances of the synths and guitars throughout the album. Even with its calmer moments, Stratus Luna reeks of high energy youthful joy. These pieces are imaginative, without heading into a distant galaxy. They are fresh and inviting for fans of the progressive and fusion genres, and are likely to be enjoyed by fans of guitar wizards Steve Vai and Joe Satriani.

Check out the wonderful interplay between the keyboard and drums on “Pandas Voadoras,” along with the jazz infused guitar licks that are cemented in the middle. Yet, this rock unfused song with its foot tapping melody continues to show off the groups incredible technical prowess, offering up good dynamics and an earful of engaging tunes.

Back in 2007 when they were mere children, brothers Gustavo and Ricardo with their cousin Giovanni played as a trio on a variety of television programs aimed at kids. As they evolved, improving each year, they found their home with their current style. Bassist Gabriel joined the others in 2017 to fill out the formation, introducing even more influences into the bands music.

I definingly recommend the band’s self titled debut album Stratus Luna for progressive and fusion fans, along with listeners wishing to discover music from around the world. Released by MoonJune Records for international distribution, CD and download versions are available through their BandCamp page.