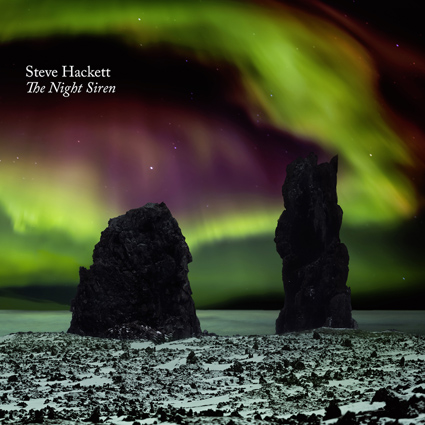 Showcasing Steve Hacket’s virtuosic guitar playing as strongly as ever, his latest release “The Night Siren” once again features regular collaborators, along with musicians from several different countries who were invited to celebrate unity and multicultural diversity.

The album title, The Night Siren refers to a wakeup call, which is warned by a siren that has been echoing in this era of division and strife. In these times of unrest, he has been inspired to express his belief that the world needs more empathy and unity. Embracing musical sounds from around the world, Hacket has added depth to his eclectic approach to music while also showing how people can be brought together no matter where they are from.

The music focuses on the plight of refugees throughout the ages, and reflects on the damage from war as societies aim for a better world. The various themes celebrate our life force, breaking away from the chains of repression.

Reviewed here is the special edition CD/Blu-Ray featuring 5.1 Surround Sound and 2.0 Hi-Res Audio, plus a making-of documentary. For those analog enthusiasts, a gatefold 2LP vinyl + CD, which contains a digital download is also available.

The Blu-ray contains two surround codecs, a DTS-MA 24bit/48k 5.1 and a LPCM 24bit/48k 5.1. I found no major differences between the two, although the LPCM layer is slightly more open to my ears and the bass a shy bit lighter too. The primary weight of the surround mix is focused up front on the opening track “Behind the Smoke” which builds from a relaxed opening into a thunderous bridge, complimented by the Tar playing an Arabian styled riff, paving the way for a multitude of various ethnic influences. Surprisingly the center channel is literally silent while the back channels pretty much carry reflections, providing a spacious mix. There are moments of surround bliss as guitars scream from the front to the back channels and drums pound heavily while echoing across the soundstage.

“Martian Sea” initially opts for a 80’s Hacket style, however without cheesy synth patches, instead blending in sitar leading into an Indian influenced instrumental section. Back channels have been used creatively to introduce the sitar and add melodic keyboard parts. Even the guitar solo at the end takes a walk among the speakers as the drum patter out a steady beat during this extended solo.

I am reminded of Genesis when listening to “El Nino” with its haunting orchestral themes overlaid by tribal drumming making this a stand out piece for me. Hacket’s guitar sears from the center channel while drums hit across the front channels and reverberating to the rears depicting an aural rendition of the devastation from this catastrophic natural phenomenon.

Overall I am delighted with the recording and mixing, and find the dynamic range to be very good, along with excellent tonal balance. Each part is clear, rich and impactful.

Yet, the album is just getting started. “Anything but Love” blends in Flamenco guitar during the intro, leading into a vaguely Latin feeling tune, reminiscent of mainstream Santana, with Hacket unexpectedly adding a spectacular harmonica solo. The main four channels are firing keeping the surround mix very alive immersing the listener when seated in their sweet spot.

Guitars are plucked from the back channels as “Inca Terra” starts, followed by dreamlike swell of vocals that is reminiscent of Yes. Orchestration spreads across the rears as vocals fall across the soundstage. With a Irish Celtic feel, in proggy Hacket style, “In Another Life” propels into a blowout solo the screams from the center channel. Roger King’s swirling synth parts echo across the front and the surrounds take on secondary parts along with adding depth with reflections.

As the album builds to the optimistic “West to East,” with the voices of the world apparently united spreading the message of peace and reconciliation, audiophiles surely will be in pure bliss. The mix is fantastic, the recording quality is incredibly clean and clear, channel separation is very good, and dynamics are wonderful. Truly, I am delighted with the Blu-ray 5.1 mix, and have only great things to say about it.

Likewise, the 2.0 Hi-Res 24bit/48k LPCM version is excellent, allowing listeners to effectively hear what was heard in the studio when The Night Siren was mixed. Each song has a unique scene, and the background slowly changes as the track progresses. Fans will also likely enjoy the “Making of documentary.”

I feel that The Night Siren is Hackett’s most openly political release from his five decade career, bringing to his fans his most powerful , dynamic and personal album. It seems his creativity is boundless, and I welcome the eclectic nature of the pieces which he has seamlessly sown together. For those like myself who -have followed him for years, The Night Siren is quite simply essential Furthermore, for Hacket newbies, this album is perhaps the perfect choice. It is an extremely cohesive album that is superbly executed at all levels. Finally, this is a must have for any surround sound collectors, and certainly a release that all progressive rock enthusiasts will want to enjoy.