Steve Hackett - At the Edge of Light - 5.1 DVD surround review 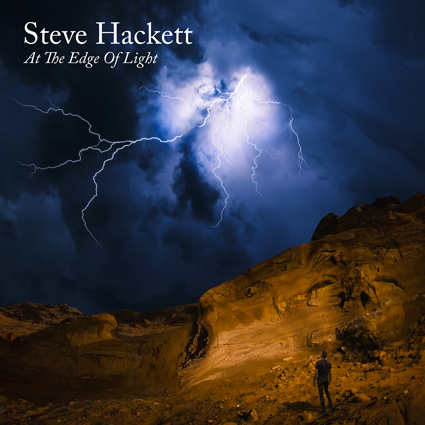 Guitar maestro Steve Hackett continues to be a world music ambassador on his 2019 release At the Edge of Light. This unabashedly strong rock album accentuates the progressive genre with instrumental influences from around the globe, all while featuring strong songwriting and musicianship. Maintaining his passion for surround mixes, the album is available as a CD + DVD edition which contains both DTS 24-bit / 48kHz 5.1 and Dolby AC3 5.1 versions mixed by Roger King.

Leaping straight into the surround mix, I naturally selected the DTS codec which sounds cleaner when compared to the Dolby Digital alternative. Specifically, the Dolby version is distinctly more squashed, which is most apparent on the drum parts. Depending on your spectral preference, the mix will either sound wonderfully vivid or as I hear it, sharply thin. Yes, there is some qualitative deep lows, however for me these are overshadowed by the snappy drum parts that have been accentuated across this release. Fans of his signature lead electric guitar work will be over joyed at the clarity of his solo which soars from the center channel on the short opening track “Fallen Walls and Pedestals.” Likewise, full use of all channels have been masterfully engaged on this instrumental opener which relies heavily on echoes and delays to extend the parts from the front to back channels, while also placing discrete elements behind the sweet spot.

As the huge sound of the opening track segues into “Beasts In Our Time,” synth strings swell from the front to back channels creating a real outwards push. Alternating between pastoral acoustic guitar and Rob Townsend’s uplifting saxophone, Hackett’s vocals penetrate distinctly from the center. The angelic harp and darker symphonic hues descend into the zealous finale which is a 5.1 aural delight.

Taking on a particular idiom, Hackett approaches the gospel style at the start of “Underground Railroad,” which once again makes wonderful use of the surround stage. This is also a perfect example of the fantastic openness to this recording with voices and instruments placed in all corners. Sisters Durga and Lorelei McBroom add their passionate vocals on this tale of the famed escape network for slaves to travel towards their freedom. As the song develops into a more bluesy sound, Hackett pulss out his dobro, harmonica and slide guitar leading into his more common heavy progressiveness. Dynamics are moderate, yet never seem to reach the highs I would expect.

Still traveling around the globe, we find ourselves placed in India with Sheema Mukherjee playing the sitar with accompaniments on tabla on the track “Shadow and Flame.” There are some cool aural movements of parts across the back channels that absolutely heightens the multi-channel mix. These wonderful traditional instruments greet co-writers Hackett and King elevating their approach to orchestration and percussion playing out the theme of the album

At the Edge of Light is so well crafted for surround listening with many parts that fill all corners of the room. The density overshadows the brilliant discrete experience when folded down to the 24bit / 48kHz LPCM stereo version. Yes, there are many fantastic 2.0 albums, but this latest release from Hackett is perfect for surround listening, and the stereo layer is simply cluttered and lacks the enormous sound the album deserves.

Closing with a mini-epic across three separate tracks, “Descent” revolves around an incessant staccato drum line and orchestration overlaid by soaring electric guitar solos. The darkness moves into “Conflict” featuring lead guitar lines and symphonic grandeur, magnificently opening across the soundstage. It all culminates with “Peace” entering with acoustic piano and Hackett’s lone voice leading the way. As the song builds, very sweet melodic melodies unfold and expand as Hackett sings, “You know, you know, you know, you know, the sun that shines through broken skies are mirrored dreams within your eyes,” a hopeful ending as we stand at the edge of the light.

I strongly recommend this 54 minute album which offers a diverse and compelling flow of melodies and themes. Best for fans of progressive rock, followers of Genesis, and certainly surround sound enthusiasts. InsideOut Records has made this available at an extremely reasonable price, making it a perfect addition to your library.