Squackett - A Life Within A Day - DVD 5.1 surround review 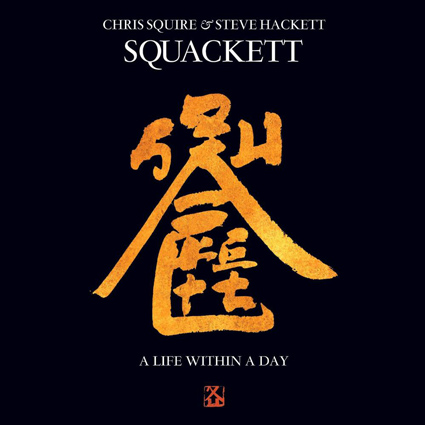 Squackett is the collaboration pairing progressive rock veterans Chris Squire bassist for Yes, and former Genesis guitarist Steve Hackett, who have been working on the release of "A Life Within a Day" for four years now.  The two began working together after having actually met in the mid-80s in the U.S while Chris Squire was working on a solo Christmas album (Swiss Choir) and needed some guitar parts. Squire was put in touch with Hackett, who contributed guitar to Squire's album. The bassist returned the favor by playing on Hackett's last two solo releases, Beyond The Shrouded Horizon and Out Of The Tunnel's Mouth. As they worked together on these recent projects, the nine songs on A Life Within A Day were born.  Joining them is Roger King on keyboards, Amanda Lehmann on vocals, and Jeremy Stacey on drums.

A Life Within A Day has musical elements you might expect, including 70's era Genesis tossed with a little Yes, and peppered with a taste of Brit pop ala XTC as well as a little prog-pop from Hackett's side project GTR. Though the level of musicianship is high, it's very much a vocal album with tight harmonies and lush arrangements. It's a dreamy, smooth, and accessible progressive leaning record with a silky production. It also features excellent playing and gorgeous guitar tones.

Starting with the classic big sound of progressive rock, the title track could be quickly compared to the sound to GTR,   Morphing into a groove reminiscent of Led Zeppelin's Kashmir, then soaring to other places with Squire and Hackett's ethereal vocals, inspired guitar riffs, and a rocking double time bridge section bringing to mind Yes's "Roundabout." While the lyrics are evocatively trippy, this is a strong beginning for their collaboration.

The surround mix has been masterfully created by sound engineer Roger King, who is taking the listener on a fulfilling journey throughout the album.  Lead vocals, bass, drums and some instrumentation are up front, and a generous use of the center channel also includes Chris's bass.  Additional elements are placed to the rear, and on some tracks synths come from the sides.  Roger uses the ambient sounds of reflections and delays coming from all directions, spreading the soundfield all around the listener.  Some fun twists of the knobs move voices and instruments around emphasizing certain lines during crescendos and breakdowns.  The quality of the sound is exceptionally smooth and not overly bright.

Also, taking a listen to the lossless stereo mix reveals an entirely different album compared to the surround sound versions.  The mix is drastically brighter, yet while the sound field has collapsed to two channels, it steps out from the front speakers.  Without a vinyl copy in hand, pure analog fans should expect this to be a treat.  The stereo mix is strong and will not disappoint those listeners who have not embarked on the expense of surround sound.

Progressive rock efficianatos will likely be disappointed by the relative few odd time changes, instead they will find the majority of the album is filled with toe-tapping tunes.  Featured are several songs with wonderful high-energy Hackett solos and a Squire bass solo on Stormchaser.

"Divided Self" starts off with 12 string guitar parts in classic British pop in XTC form then delves into psychedelic sounding vocals which are heavily manipulated by studio toys. Elements of early 80's progressive rock are ever present and exemplified as the piece closes with an abstract section that heavily leans on a classical music finale.

The last tune, "A Perfect Song," features a truly inspired Hackett playing at what could be considered his best. A Life Within A Day is every bit what you'd expect from such talents like Chris Squire and Steve Hackett,, albeit with a commercial edge added to these nine songs.  Highly recommended for all music lovers, this is truly a great rock record that is not just for the progressive rock community.

Choose either the CD and DVD-Audio Deluxe Set, or as a Vinyl album.