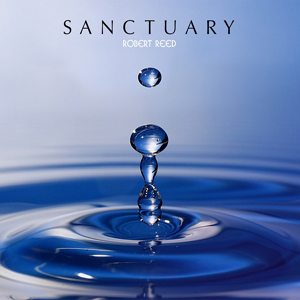 At the age of seven Robert Reed was inspired to become a musician after hearing Mike Oldfield's "Tubular Bells." He went on to learn how to play not just one, but all the instruments featured on the album. Released in July 2014, Sanctuary is the fruition of his desire to create an album in the style of Tubular Bells; As a multi-instrumentalist, Reed composed "Sanctuary," and has played all the instruments, without any synthesizers or sampling, he wanted everything to be real.

For those not familiar with Robert Reed, he is the leader and keyboardist of Magenta, a well established progressive rock group. He also created the incredible debut release by Kompendium, which I reviewed last summer. While Reed owned all the guitars and other instrumentation used on Sanctuary, he needed to hire the larger percussion instruments, like timpani's and tubular bells. A truck arrived with a load of the most expensive percussion provided by the lead percussionist of the Welsh National Orchestra. Reed said, "For two days he frowned as I made my way through playing these instruments, like a kid in a sweet shop. Whenever I struggled he continued to ask if I wanted him to play them. I replied that I couldn't, as it would break the pledge of making the album by myself.... Everything is played by hand by myself, except for guest vocalists, Synergy Vocals."

By no means is Sanctuary a rehash of Tubular Bells, it is much more of a tribute. Reed worked hard to compose melodies that stand on their own, while still capturing the emotion conveyed through Oldfield's playing that replaced lyrics on Tubular Bells. Reed used voices singing vowels combined with nonsensical words instead of lyrics. The result is an intriguing piece of emotional instrumental music.

The surround mix Is enveloping, with an excellent sonic quality. Repeated in a myriad of variations throughout the disc, the main theme sets the tone that continues throughout the album. Electric guitar takes the spotlight and it dominates the score with rich clarity, sparkle, and roundness. The Synergy vocalists place a canvas in the background from the rear channels, while the recorders offer up pastoral vistas. The resonant bass carries forward the sentiment of Tubular Bells without overpowering the remaining parts.

As the second part unfolds the vibraphone spreads across the back channels nodding to fusion percussion master Pierre Moerlen. Forget about synthesizers and sequencers, Sanctuary features acoustic guitar, bass, and recorder which spread out across the front, providing fantastic separation among the parts, it is so very nice to hear music played by musicians, well, one musician in this case! Of course this album wouldn't be complete without the use of tubular bells that chime in subtly as it nears the climax. As the dynamics build the spark from his electric guitar drive the piece into tympani overdrive. Topping it off with the main theme emphasized by voices chanting "Oh maka-che, maka- che, maka-chukala" Sanctuary really draws its parallels to Oldfield's original TB album. The outro calmly closes the two part piece, a real nice tribute overall.

Naturally I prefer the MLP 96kHz / 24 bit 5.1 Surround Sound version, which has very good balance and plenty of space among instruments. The Stereo Lossless version unifies parts within the mix while presenting a wide and somewhat deep soundstage. Certainly for fans of both Oldfield and Reed this is an album to include in your collection. An enjoyable listen.