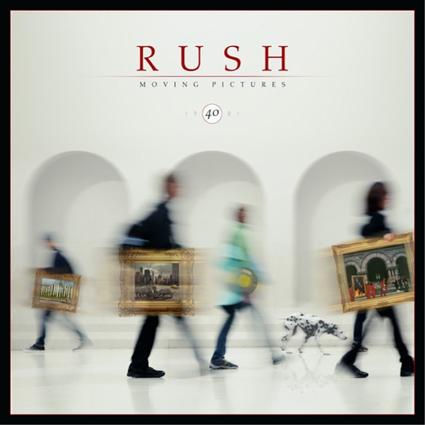 Rush has managed to remix their previously remixed albums a couple of times, and their most well known album Moving Pictures has joined that camp too. There has always been some trepidation for the earlier surround mixes, which initially came out on three Sectors box sets. As the Blu-ray disc format was just gaining popularity both “2112” and “Moving Pictures” were issued as standalone multi-channel releases. You can find a review for the earlier edition here.

However, now 40 years on from its original release, Moving Pictures has been completely updated and packaged as a Super Deluxe Edition. This edition contains three CDs, one Blu-ray Audio disc, and five 180-gram black vinyl LPs. The set encompasses the Abbey Road Mastering Studios 2015 remastered edition of the album for the first time on CD, along with two discs of previously unreleased and newly restored bonus live content newly mixed from the original analog live multi-tracks by Rush's original producer, Terry Brown, featuring the band's complete, unreleased Toronto concert from Maple Leaf Gardens in Toronto, Ontario, on March 25, 1981. Of greatest interest to high resolution and immersive listeners is the Blu-ray Audio disc featuring the core album newly mixed from the original multi-tracks in Dolby Atmos, Dolby TrueHD 5.1, and DTS-HD Master Audio 5.1 surround sound as done by noted producer/engineer Richard Chycki, alongside the previously available PCM Stereo mix. Also included on the Blu-ray are four bonus videos: a brand-new video for "YYZ" plus three remastered vintage promo videos for "Tom Sawyer," "Limelight," and "Vital Signs." Additionally, all of the vinyl in the Super Deluxe Edition has been cut via half-speed Direct to Metal Mastering (DMM) on five 180-gram audiophile LPs.

It is worthy to note that a Dolby Atmos Digital edition is also available via streaming including all seven tracks from the original album. Also, a 3 CD set, as well as a 5 LP 180g set are available, standard vinyl edition and digital download. Fans can also stream the remixed album in Atmos too.

If somehow Rush hasn’t been on your radar or added to your collection yet, this is a fantastic place to start. Given that Rush has sold more than 25 million albums in the U.S. alone, with worldwide sales estimated at 45 million, and has been awarded 24 Gold, 14 Platinum, and three Multi-Platinum album distinctions, they are a true progressive rock phenomenon. Additionally, Rush has received seven Grammy nominations, and the band was inducted into the Canadian Music Hall of Fame in 1994 and the Rock and Roll Hall of Fame in 2013. Yeah, you want a copy of this release – period.