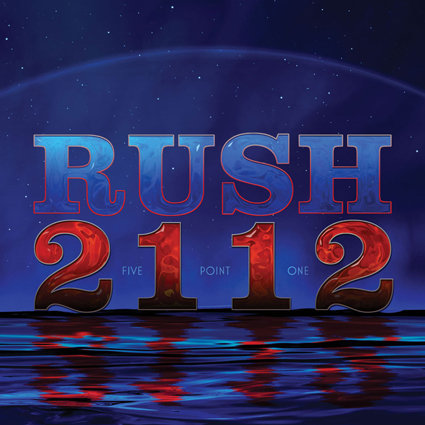 Originally released in 1976, 2112 was the Canadian three-piece band's breakthrough album. Guitarist Alex Lifeson described it as, "the first record where we sounded like Rush." Fans have been waiting for the high resolution surround sound version, which was released on Dec 18, 2012 as three deluxe editions. These include a CD/DVD or CD/Blu-ray, with the package including the remastered album and three bonus live tracks on CD. The second disc includes 5.1 surround sound mix and an interactive digital comic book. Original sleeve designer Hugh Syme has created a new cover and the liner notes are accompanied by previously unpublished photos. Also a Super Deluxe Edition is sold as a CD/Blu-ray package, assembled in a hardbound book case including a 40-page comic book which refers to every song on the album.

My copy arrived on the auspicious day of 12-21-12, and my first listen was very enjoyable. From the opening notes, the Blu-ray audio experience is enveloping in a very natural way with Geddy's vocals primarily emanating from the center. However the surrounds are only lightly used making this a very front dominated surround mix.  Lifeson's guitars have a raw, rich and resonant tone that are very powerful at moments and are light and delicate at other times. A minor disappointment is that Peart's drums don't spread as wide as one would expect, although this doesn't detract from their impact.

Along with the surround sound audio tracks, there is plenty of eye candy with the accompanying video comic-book type of animation that provides the lyrics and a bit of story-telling to reveal some of the context in which the song's ideas were derived. While I found it somewhat captivating, I often found myself closing my eyes and just listening to the great music and mix.

2112 is clearly the cornerstone for any Rush fan, and with this reissue it has once again shown up on the Billboard top 200 albums.   The title track spanned the entire first side of the album when it was first released.  From various parts including The Temples of Syrinx on to Discovery, their masterpiece 2112 firmly cemented the band into the progressive rock genre.  The surround mix places the listener among the flowing water where the discovery is made, and sends guitars and synths around the listener on a couple of occasions.

We recommend the Bluray disc, which include DTS HD Master Audio versions.  This is a must have for any progressive rock fan.

CD and Bluray or CD and DVD-Audio.