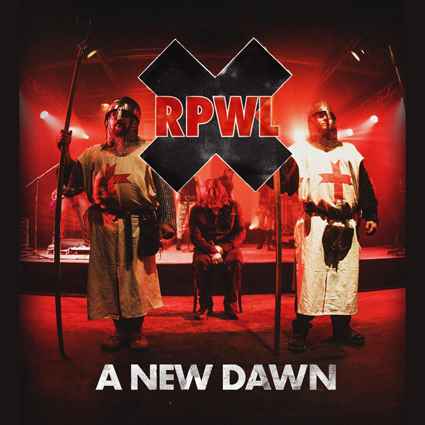 On the occasion of their 20th anniversary, art rock band RPWL has released “A New Dawn,” a 2 hour long concert featuring both stereo and surround mixes, each with audio tracks in your choice of English or German. The Blu-ray edition contains the following audio formats: LPCM 2.0 48kHz / 24-bit, Dolby True HD 5.1 48kHz / 24-bit, and Dolby Atmos 7.1. The lines from the German language live show were dubbed by the narrator and actors into the English version.

This autumn 2017 release documents the final stop of their “Wanted” tour. Recorded two years earlier in October 2015, on this special evening the band played in their hometown of Freising, Bavaria, featuring an elaborately assembled combination of elements that included multimedia and a play, all underpinned with the music by the band. This video concert was the first and only time that such a mammoth production was brought to the stage, extending the band to include a cast of around 50 actors and extras.

The Blu-ray also contains a few extras including a 15 minute "Making of film" of the concert movie, their encore at the Freising show of “Unchain the Earth” as well as a music video.

The production quality is stunning, capturing a performance rather than a concert drawn primarily from their latest studio album “Wanted.” The actors and band tell a story with a thoughtful message which may or may not be for everyone. However, the music is top notch, generally appealing to those who enjoy Pink Floyd, born out of the bands tribute band roots. Fans can also hear some Genesis and Porcupine Tree tossed in the mix, a bit heavier at times but always melodic.

Since I am not setup for Atmos this review focuses on the 5.1 mix and offer some notes on the LPCM stereo mix. Overall both the audio and video are truly excellent, instruments are very clear and extremely well recorded. As an immersionist, it is fantasic to hear how the back channels are used so wonderfully, with effects discretely punctuating from all corners, while also presenting a live performance with an excellent live feel. While I did check out both the German and English versions, as an English speaker, I obviously preferred the English dubbed version of the narration parts, which worked exceptionally well. Regardless of your language choice, all songs are sung in English.

Picture quality is outstanding, and not even overkill for camera movement and excessive cutting. Shots give fans both a front row and set back view of the stage and performers, while also adding in plenty of closeups on various instruments. I specifically dig the overhead shot of the synthesizer on the second song “Swords And Guns.” While much of the band primarily is focused across the three front channels, there are sections where the back channels roar with synths, backing vocals and other performer effects. Beyond that, the back channels typically emit the aural ambience of the theater, nicely extending the stage into the listening space.

While I personally yearned for a deeper bass and fuller snare and kick, I also recognize that the slightly thin sounding mix is a production choice rather than an imperfect recording. The impact is still there, and with very good clarity and nice overall balance. I really feel enveloped when the backing vocals land behind the sweet spot with some absorption up front, along with synth pads also falling behind me on the track “Wanted.” Check out how the audience completely surrounds you during the breaks between songs, giving a true feeling of being right there at this unique and ever so special performance.

While some fans may not like the message that is part of the narrative, it does bind the entire performance together. I kept thinking how it would have struck a perfect balance by offering just the concert portions of the program as a separate chapter, but the performance is integrated too deeply for an easy and clean removal that would create an alternative chapter. The filming can be dark in areas and somewhat over saturated, yet I found none of that to be an issue that effected my viewing pleasure. I rather enjoyed the deep blacks and vivid colors while getting smothered with sound emanating from all speakers.

The center channel has been generously used throughout with a moderately wide soundstage. Dynamics are good and the recording is free of unwanted distortion, providing a distinctly clear aural experience. The LPCM stereo mix has a distinctly different coloration from the 5.1 surround mix that satisfies my bass desires and fulfills the slightly thin kick and snare I heard in the multi-channel mix. However, while there is some depth to the stereo soundstage, it doesn’t compare to the actual 5.1 mix, flattening everything to the point where I no longer feel like I am at the show.

I don’t get why the encore “Unchain the Earth” was not part of the main chapter, and also not mixed in surround. Alas, this song along with their video of Swords and Guns can be found in the Bonus Material along with the 15 minute Making of Documentary spoken in German with English subtitles.

All in all, this is by far one of the finest concert music Blu-rays I have enjoyed to date. An absolute must have for RPWL fans, strongly recommended for progressive fans, especially those who are into Pink Floyd. Likewise, this is a very worthy addition for surround enthusiasts who enjoy ear candy along with visual stimulation. Really, you can’t go wrong with this disc, especially at the price point.

Blu-ray with convert performance video in 48k/24 LPCM stereo, DTS MA 5.1, or DTS Atmos.  Also available on DVD, however vidoe is reported to be in PAL format.  CD and Vinyl editions available too.