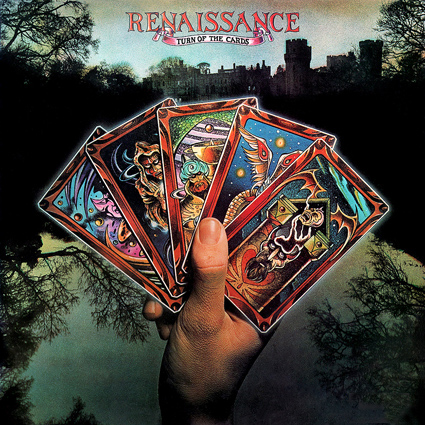 The 70’s heyday of progressive rock continues its revival in the surround world with the first 5.1 mix from the band Renaissance. Cherry Red Records has released an expanded 3 CD + 1 DVD box set of their 1974 album “Turn of the Cards” featuring a new 5.1 surround sound mix of the entire album, 20 bonus tracks drawn from a newly mixed concert performance at the Academy of Music in New York from May 1974, along with previously unreleased material.

While Turn of the Cards is the fifth album from the band, it is often marked as the third since it is the third from this incarnation of the group, following after “Ashes Are Burning” and “Prologue.” Each of these earlier two are considered equally impressive from a songwriting and performance perspective with Turn of the Cards inserting a few new musical twists. The songs here songs fit more into a rock vein, leaving the earlier album's folk influences behind. While the progressive rock elements are still strong, it is Jon Camp's electrified bass and Terence Sullivan’s heavier hitting drums that take the band closer to the rock world. Of course, fans love Annie Haslam beautiful voice, blending so nicely with the accompaniment of John Tout’s piano and Michael Dunford’s acoustic guitar.

I perceive Renaissance as the perfect example for the defining characteristics of the Progressive Rock genre. The band blends classical, symphonic orchestration, and rock in a masterful way that creates lush and detailed songs with excellent arrangements. Now, place all of that into a surroundscape, and listeners end up with a vastly open mix that makes some good use of the back channels.

Opening with an acoustic grand piano that floats across the entire soundstage, “Running Hard” accelerates into a fully orchestrated song where strings and other orchestrated parts have been moderately placed in the rears, while the primary rock based rhythm section and even more orchestration is positioned up front. Digging deeper one will learn that this opening track followed by the second track “I Think of You,” plus the fifth track “Cold is Being” have each been upmixed. None the less, remix engineer Jeffrey Lesser has done an above average job at creating these mixes.

I naturally selected the DTS 96kHz / 24-bit 5.1 codec over the Dolby AC3 surround codec, the later which is typically overly compressed and often rather thin. Certainly, these differences hold true here, with the Dolby Digital AC3 producing a lack of depth and decreased dynamics, plus a striking tempering of the sparkling top-end along with the lack of a truly rich bottom and, all of which can be heard on the DTS 96/24 codec. However, for those who for whatever reason are not able to play the DTS version, the Dolby AC3 generally sounds particularly good, doing a better than average job at mirroring the tonal quality of the DTS version.

I absolutely am enthralled with the discrete 5.1 mix of the third track “Things I Don't Understand.” Drums roll in from the back right channel, moving up towards the front left followed by the distinctly crisp snare hitting hard in the center channel. Haslam’s lead vocals, blended across the front two speakers on the upmixed tracks, has now been placed in the center, and the band spreads across the front channels with some elements heading onward to the back speakers. Instruments really sound excellent with a nice shimmer from the acoustic guitar and a pleasant fullness resonating from the bass. Cymbals tingle in the left and right channels with backing vocals embellishing from the rear channels, all while the lead vocals heavily reverberate around the entire room.

“Cold is Being,” in all of its minimalism, is actually the most pronounced surround upmix on the album Turn of the Cards. It is easy to feel as if one is sitting in a pew at a cathedral with the organ stretching from the front left to the back right channels, going on to reverberate around the rather large space. Haslam solo vocals are set off toward the front right speaker and add to the sensation of actually listening inside a massive church. Although I have much better surround recordings of actual organ music, the recording and 5.1 mix herd here still conveys the aural emotion extremely well.

Generally, across the six tracks on Turn of the Cards, the depth of the soundstage is rather good with a favorable channel separation and nicely clean up audio. However, I continued to notice a texture to the lead vocals wherein the EQ has been altered and possibly another treatment has been added. The somewhat muffled tone conveys a near overdriven quality on the lead vocals which is not present on the stereo mix. I can only assume that the analog multitracks have lost some of their luster after sitting in a vault for a few decades and sometimes a digital cleanup still cannot attain the absolute perfection desired by the engineer. Additionally, the manipulation of the upmixed tracks likely has attributed to the tonality shift of the vocals.

To that end, the high resolution 96kHz / 24-bit LPCM transfer from the original stereo masters sounds exceptional, yielding a wonderful depth to the soundstage, along with nice channel separation and clarity. Without all editions on hand, I believe this hi-res version is likely the best available for audiophiles, giving another great reasons to add this to your collection. Also, for many, this may end up becoming your preferred version, skipping the surround mix upon repeated listens.

Beyond the DVD, the second and third CD’s contain a newly mixed 1974 concert performance recorded at the Academy of Music in New York City. This May 17, 1974 show with a 24-piece orchestra has been newly mixed from the original 16-track master tapes, including live versions of songs from Turn of the Cards, along with classics such as “Can You Understand,” “Carpet of the Sun,” “Prologue,” and a 25 minute version of “Ashes are Burning” featuring guest Andy Powell of Wishbone Ash on lead guitar. This is a fantastic addition to the set, and a true time capsule of a live performance. Do not miss listening to this show. Yet, from an audiophile perspective, it is hard to understand why a surround or at least a hi-res version of this newly mixed concert was not included within the box on another DVD.

I find Turn of the Cards to be a somewhat worthy addition to one surround sound catalog, since it is not a deep immersive listen. The openness accentuated by the ambient space is what makes the surround version enjoyable for me. Yet, for stereophiles, the hi-res stereo mix on the DVD along with the concert make this one not to miss. For progressive rock fans, and collectors of Renaissance, this clamshell box set edition of Turn of the Cards does bring value in many ways.Released March 27, 2020.