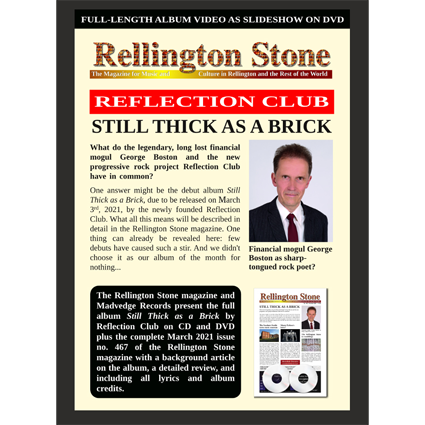 When one closes their eyes and listens to “Still Thick as a Brick” it is hard not to imagine that these are lost recordings by Jethro Tull from yesteryears. But, one cannot ignore the fact that the Reflection Club has an uncanny ability to carry forward those early 70’s prog sounds of the famed band led by Ian Anderson. A significant key mirrored sound is easily attributed to English singer, guitarist and flutist Paul Forrest who performed with the Jethro Tull Experience for many years. Yet, it is the genius of multi-instrumentalist Lutz Meinert of Margin who also formed this collaboration along-side guitarist Nils Conrad of Crystal Palace and For Your Pleasure, plus Ulla Harmuth who added flute.

For high resolution enthusiasts a CD + DVD Edition comes in a 72-page mediabook package that is similar in size to the Jethro Tull anniversary series. The music is accompanied by a slide show extending over the entire Hi-Res 96kHz / 24-bit LPCM Stereo and 48kHz / 24-bit 5.1 DTS and Dolby AC3 Surround mixes found on the DVD.

Lutz launched this prog project back in 2017, immediately recording the Still Thick as a Brick album extending into new territory from the sound of his Canterbury Psychedelic band Margin. He comments that it is no coincidence that the title of the album brings to mind Jethro Tull’s masterpiece “Thick as a Brick,” but it is not just a blatant remake, instead it picks up from that era and expands on it with elements of jazz-rock and fusion to creates a novel, near 48-minute-long, original composition.

Musically this is a superb production that is seriously close to that 70’s Jethro Tul sound, and the vocalist Paul Forrest has all the style and nuances of Ian Anderson’s voice off to a tee, which you might expect given he is a member of a wonderful Jethro Tull tribute band. Of course, for high resolution and surround enthusiasts sound is a critical piece, and I am pleased to say listeners will be delighted with Still Thick as a Brick.

Starting with a very progy classically-based track “Part 1, Prelude” immediately immerses the listener. While there are moments that the mix is front centric, throughout the album the back channels fire with plenty of discrete action, along with spatial reverberation. As the band kicks in, an extremely vibrant acoustic guitar strums and the bass resiliently digs into the bottom region with solid drums hitting all across the front channels. Vocals are distinct and absolutely mimic the spacious sound that is attributed to the unique characteristic of Ian Anderson’s vocal treatment.

There is excellent use of the center channel with soaring guitar solos that bite through revving up the dynamics of the music. Discrete elements pour from the back channels including keyboard and secondary vocal parts, making this a very immersive listen. Overall dynamics are incredibly good with instruments punching through and especially the drums which feel extremely alive.

The transparency of the DVD is excellent, with fantastic channel separation along with occasional fun ear candy wherein parts move from side to side and from the front to the back. The snare is extremely round, and the kick yields a punchy fwap along with a zingy tingle to the symbols. Each part has clearly been meticulously recorded and blended together to make for an enveloping surround mix.

The Dolby AC3 codec is naturally compressed and lacks the robustness of the rich bass heard on the DTS codec. However, this difference does provide a slightly better balance between the front and back channels allowing for a mix that feels even more immersive. For reasons of dynamics and spectral richness, I still prefer the DTS codec, and this review has been based on that version. 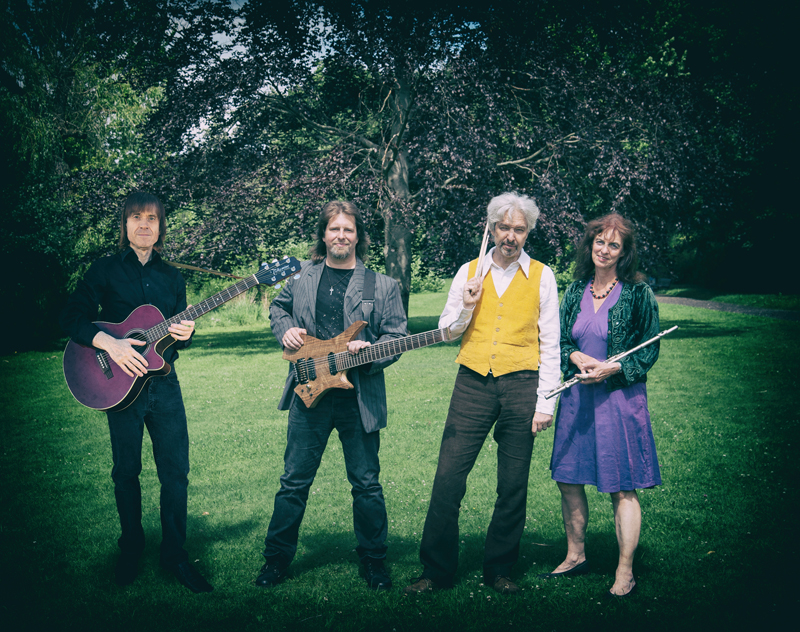 The 96kHz / 24-bit LPCM stereo layer naturally is flattened compared to the surround mix. Furthermore, it does have some tonal differences but overall mimics the surround version. As one would expect it maintains the wide channel separation and transparency heard on the surround version, plus in certain ways is a little bit more musically cohesive given the layering of the various parts. In no way do I feel there is any crowding on the stereo version, which can be the case with pieces like this that have many parts.