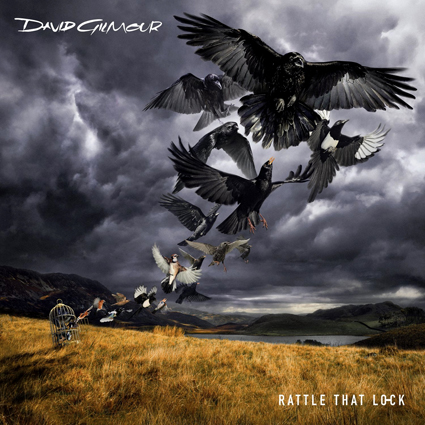 David Gilmour released his fourth solo album titled “Rattle That Lock" in late September 2015. A long time key member of the band Pink Floyd, this will be his first release since 2006's “On An Island” that went to #1. His writing partner Polly Samson adds her lyrics, and the album is co-produced by David Gilmour and Roxy Music s Phil Manzanera.

It is the four notes, created by Michael Boumendil, which precede announcements at French SNCF railway stations and recorded by Gilmour using his iPhone which begin the lead single and also the title of the album.

While there are four different package versions, high resolution and surround sound enthusiasts will want the 2 disc Deluxe Box sets that contain the CD in a hard cover bound book with gold foil blocking on cloth spine, along with a 22 page photo/lyric booklet package, either with a standard DVD or Blu-ray featuring 10 bonus audio-visual tracks, an additional 4 audio tracks, plus a surround sound version of the complete album. Of course analog fans can pick up the vinyl version is a single heavyweight LP which includes a download card, or just get the single CD if for some unknown reason you don’t want the high resolution options.

As one would expect, the sound quality is stellar with some clear differences between the LPCM and DTS 5.1 versions. I have noticed similar aural differences on other Blu-ray discs, and find that it becomes very subjective as to the specific version a listener will like. Specifically, I found the DTS Master Audio version to be warmer and not nearly as sharp on the high end as the LPCM surround sound version. Since much of the room ambience is easiest to hear in the upper range, the LPCM stands out as being livelier. Yet, I favor the DTS 5.1 codec, as I absolutely appreciate the richness of the overall mix. The stereo LPCM layer is effectively a flattening of the surround mix, and equally as excellent for those who listen on two-channel systems.

Opening up with a three minute instrumental track "5 a.m.," that features Gilmour playing guitar, it is easy to hear that this is already a fantastic multi-channel mix. Keyboards and cymbals fall to the rear and resonant bass tones emanate from the front, along with arpeggio guitar delicately moving the piece forward.

The title track, “Rattle That Lock," follows with a poppy repeating hook, featuring backing vocals of the Liberty Choir and Mica Paris that call from all corners of the sound stage. Parts cross from left to right and once again an excellent use of all five channels has been employed.

Don’t expect any fancy animation or a photo montage when playing the album, instead I suggest turning your screen off as soon as you start the disc, since only the titles are shown slowly moving around the black background. Of course there is a Pink Floyd influence, and it seems most prevalent on “A Boat Lies Waiting” with meandering piano and vocals that take advantage of digital reverb placing the piano deeply in a large space. I like how the secondary vocals come in from the back channels distinctly adding distance from the front to rears.

Go ahead, crank it up, the noise floor doesn’t exist, making the track “In My Tongue” a great demonstration of the dynamic range of high resolution audio. From the whistling melody at the start to the full band kicking in, these are the moments that make it apparent why listening to audiophile recordings is a must. Note the crisp hi-hat and enjoy more Floydian elements here.

A round bottom rolls in as the instrumental track "Beauty" begins, with some really nice guitar perking up from the front left which echoes and slaps across the sound stage. Keyboards take the right channel reverberating off the back channels, with strong bass and drums taking the center along with a chunky rhythmic guitar part.

Gilmour has a passionate attachment to his mostly out of place piece "The Girl in the Yellow Dress" that evokes the standard jazz era of the early 60’s. I happen to love this song which opens with a stand-up double bass riff that sounds so real that you’d think the player is right in front of you! Gilmour’s lead vocals are crystal clear, giving me a feeling of being right there in a night club. The keyboards tickle from the right rear, with the jazz downbeat of the guitar in the back right, leaving the bass drums and vocals up front with the sax spreading across the entire room. It is a very airy mix that makes me want to light up.

"Today" is the second single from the album, leading off with a choral intro with parts playing off one another from corner to corner. You’ll want to get down when the band kicks in, and dig the infectious snare and tom-tom hits at the front, along with the keyboard punches from the rear. Gilmor’s rockin’ solo spreads from the front echoing side by side in the back channels, totally awesome. Yes, more great use of all of the surround sound channels.

David Gilmour masterfully closes Rattle That Lock with a third instrumental tune titled "And Then...,".leaving you to want more as the sound of a fire burning fades out.

There is a plethora of extras on the Blu-ray, including interviews, videos, and alternate mixes. It all kicks off with a few adhoc jams that really shows off the inspired rawness of the players featuring video footage on these barn recordings. These jams provide a great insight to the creative energy that is involved in making an album like Rattle That Lock. The animated film of The Girl in the Yellow Dress is excellent, along with the preceding short documentary about the same. Regarding alternate versions, while I can appreciate the orchestra version of The Girl in the Yellow Dress, please tell me the youth mix of Rattle That Lock is just a joke, as it takes the song in an entirely new direction, and one that this progressive rock fan doesn’t like at all. But, I guess if I was on a dance floor I could excuse myself for shakin’ it to some David Gilmour.

An absolute must have for surround sound fans and fans of Pink Floyd and David Gilmour alike. The album grows on you very quickly, and I can easily recommend it for progressive rock fans and anyone who likes well written and recorded music

Either as a CD and Blu-Ray or DVD box set, or as a single heavy weight vinyl edition.