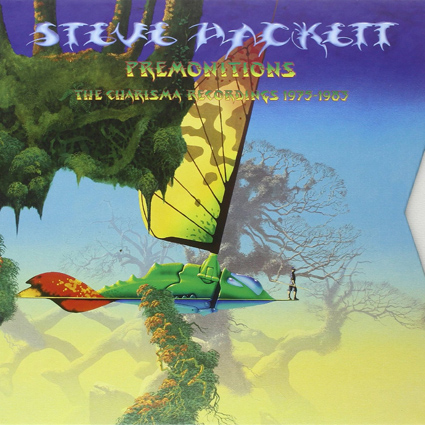 What makes this set so appealing for high resolution and surround sound fans are the 5.1 surround sound mixes by Steven Wilson of “Please Don’t Touch (1978)” and “Spectral Mornings (1979),” along with pseudo surround mixes of “Voyage of the Acolyte (1975)” and “Defector (1980)” both utilizing the Penteo upmix software, since the original multi-track tapes are missing. The remaining two studio albums, Cured (1981) and Highly Strung (1983) are CD only.

Putting Steven Wilson in front of a mixing board to remix an album from the original multi-tracks is a literal guarantee of excellence. He continues to bring out the best dynamics and sonics, bringing warmth, depth and shimmer to every part. When placed in a 5.1 surround sound environment, the discrete mixes absolutely open up the complex layers found on progressive rock releases from artists such as Anthony Phillips.

I especially like how a single acoustic guitar is gently carried from front to back with subtle reverb and a touch of delay, meanwhile the flute hangs airily overtop on “Kim.” Building from this the tambourine is crisply heard up front and subtly reflects off the back channels on “How can I?”

One of my all time favorite Hackett songs “Hoping Love Will Last” becomes wonderfully immersive with synth melody parts from the rear and strings up front. The powerful vocals of Randy Crawford are anchored in the front center channel with the bass and drums spread across the left and right channels moving the listener through the song. This all melds together into subsequent pieces including the title track, each continuing to demonstrate the encompassing power of surround sound mixes.

His third Studio album “Spectral Mornings” veers a bit more to the commercial side, which comes out of the gate on the opening track “Every Day” with a thumping bass and heavier hitting drums. Fear not, a pastoral progressive sound surrounds the listener with flutes, guitars and vocals on “The Virgin and the Gypsy.” Wilson masterfully fades the ticking clocks to both rear channels, bringing in other instrumentation primarily spread across the front on “Clocks - The Angel of Mons.” Since I am a sucker for movement within a mix, “Tigermoth” hands down takes it for me on this multi-channel masterpiece. With synth parts swelling across the rear channels and heading back up front, along with effects that circle the room, this is exactly what I enjoy about surround sound music.

Of course I wish all of his releases within this box set were available in discrete 5.1, but I am glad that I gave the Penteo upmixes a chance, as these really do open up the stereo mix into the surround environment. Sure, these are not discrete mixes from the original multi-tracks, but they are a pleasantly immersive experience. Technically I am certain there is a lot of magic with the Penteo upmix software, however the concept is simple. Whatever was mixed to the absolute center is placed in the front center channel, removing it from the sides. Then everything hard panned to the left or right is sent to the respective rear speaker, leaving the balance in the front left and right channels. Much of what listeners will hear on Voyage of the Acolyte and Defector is the string synth pads, reverb, and delays coming from the rear channels, while the vocals and some drums are front and center, with the remaining instrumentation spread across the front channels. There is plenty of leeway here with swells that shift from front to rears among other parts that move across the mix, these parts have been analyzed and placed into the surround space in ways characteristic to the upmix tool. Pretty impressive for what they are, and certainly more immersive than I expected.

As mentioned, his first six studio albums are also included on CD, plus two live concerts spread over four additional compact discs. The shows are good, but I am certain there are reviews for that material, and since they are not available in high resolution within this package, I won’t discuss them further. Except to say, given the low cost of media, I am actually surprised that 24/96 stereo versions weren’t added on an additional DVD or two.

Recommended for die hard Steve Hackett fans and surround sound collectors, especially those intrigued enough to hear how up-mixing software can truly expand a stereo mix into surround sound. sturdy packaging with nice outer case. Check global prices, as improved pricing may be available outside of your region.

On the other hand, fans can now choose stand alone albums which contain the surround sound versions described above on a DVD, along with 2 additional CD's.   However, for completists the Preminitions box set is a better bargain, as the three stand alone sets listed below nearly add up to the price of the massive box set.