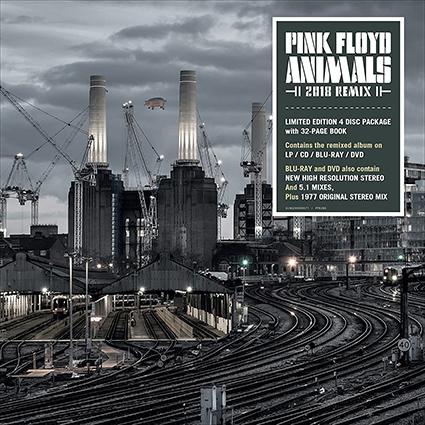 It took several plays before I warmed up to “Animals” back in the day. The polished pop sound had felt very distant from their psychedelic origins and synth laden album Dark Side of the Moon. Years on Animals has become a must have album as fans pushed it to number 2 in England and number 3 in the USA, and like other surround sound enthusiasts, I have been eagerly awaiting the remix of this beloved album. In 2018 collectors were teased with a SACD marketing announcement that failed to arrive, and subsequently we learned of internal disputes between Roger Waters and David Gilmour over the liner notes that held back the release. Now the wait at long last is over, and Pink Floyd’s Animals 2018 Remix has been released on a variety of formats including CD, LP featuring gatefold artwork, and for the high resolution and surround sound audiophiles a Blu-ray and SACD are also available featuring an all-new 5.1 surround mix by James Guthrie, all available on September 16th, 2022. A couple of weeks later, on October 7th, a Deluxe Gatefold version that includes the 180 Gram black heavyweight vinyl LP, CD, audio Blu-ray, an audio DVD and a 32-page book will be released for the immersionists. While the Blu-ray and DVD audio include the same content, the codecs are very different. The Blu-ray includes 192kHz / 24-bit Uncompressed Stereo dts-HD MA, a 5.1 Surround: 96kHz / 24-bit Uncompressed dts-HD MA, and the 1977 Original Stereo mix also presented as 192kHz / 24-bit Uncompressed dts-HD MA. On the other hand, the DVD contains the Stereo remix in 48 kHz / 24-bit Uncompressed LPCM, the 5.1 Surround mix in Dolby Digital @ 640 kbps, 448kbps, and the Original 1977 Stereo mix also as a 48 kHz / 24-bit Uncompressed LPCM codec. In the deluxe box set the 32-page booklet features rarely seen behind the scenes photographs of the original album sleeve shoot along with live images and memorabilia. However, for quadroholics, don’t expect to find a quad nugget buried on these discs, as there was never a quad vinyl release available back in the day.

Long-time fans will recall the album's iconic cover featuring an inflatable pig (known as Algie) floating between two chimneys of London's Battersea Power Station, conceived by Roger Waters, and designed by long-time collaborator Storm Thorgerson of Hipgnosis Studios. When the band toured the music was presented in quadrophonic around the various stadiums with an inflatable pig flying high above the audience.

For this new release, the artwork has been re-designed for the modern era by Storm’s Hipgnosis partner Aubrey 'Po' Powell. Taking new shots of the building as it appeared during some recent conversions, Po experimented with new angles and produce some striking new takes on the classic cover using updated photographs that reflect the ever-changing world. Note that the cover art for the Blu-ray version is a different design compared to the other editions in this release.

I chose to get the stand-alone Blu-ray edition, which arrived on release day. I promptly listened to the entire album, and while generally very pleased with the overall sound quality and separation of the 5.1 surround mix, I felt that mixing engineer James Guthrie could have gone a lot further with the creative use of the surround channels. The album is bookended with “Pigs on the Wing, parts 1 and 2” respectively, featuring acoustic guitar and vocals. One would have no idea that the 5.1 surround mix is selected for these two songs, as there is no action in the surround, center, and LFE. While the guitars are nicely cleaned up with a pleasant sheen, the vocals have been dried up while also moving up in the mix, representing a characteristic sonic change for the album right from the start. In fact, the center channel is effectively not used throughout the entire album, which depending on your perspective, is good or bad. Critically speaking, I am very much in the middle on this point, noting that mixing balance is much better obtained when vocals are placed across both the front left and right channels, mimicking a phantom center. However, off axis, non-sweet spot listeners obviously lose the central focus perspective that instead would be offered by using the center channel. Furthermore, depending on one’s actual setup, the center channel may run hot, be exacting, or even under the output of the two mains, causing an entirely new set of issues for 5.1 mixing engineers. So, I am fine with the severely limited use of the center channel with some reservations.

Progressing into the dis to the second track “Dogs,” which occupies nearly the entire first side of the original vinyl edition, the surround mix opens up, spreading into the surround speakers. Now, I am comfortably immersed, yet still yearn for more psychedelic use of the surroundscape. Channel separation is fantastic, and the overall clarity is truly wonderful. However, for purists, this is simply not an expansion of the 1977 mix. It also is not an entire reimagining of that mix into a spatial audio experience either. Rather, there are distinct changes to the mix that some may feel are improvements, while others may feel are distractions.

Although the LFE channel has barely been utilized, which frankly is fine from my perspective, Roger Water’s bass is extremely strong, round, and resilient. Sure, it is overpowering compared to the original stereo mix, still I rather like how it is anchored in between the fronts with drums spreading outward, and guitars and synths taking position further out in the left and right main channels. Truth be told, in many ways this is actually a quad mix, that has added light use of the sub-woofer and ambient blending whispering from the center channel.

Behind the sweet spot delayed reverberant acoustic guitar parts strum at the start of Dogs, with Richard Wright’s synth swells that move from the surrounds into the mains and vice versa, offering some ear candy for immersionists. Even cymbals pop up in the back and vocals stretch from the mains into the surround with ambient reflections providing depth to the surround mix. I felt that the acoustic guitars dynamically popped when compared to the original mix where they felt a bit more muffled. On the other hand, Nick Mason’s pounding drums under David Gilmour’s first riveting solo sound way to bombastic to me, and Wright’s Moog synth solo that leads off into the second bridge feels elevated as it pours from the front and back channels.

Nearing the end of the second track, the music breaks down into a somber slow moving synthesizer laden section that follows the repeating of the last word of ‘Dragged down by a Stone.’ While I may wish this element took on greater movement, instead it is the synths that dance around the soundscape, sometimes darting from one side to another, while others move in motion around a few speakers, or even just bubbling up only to simmer down. It is pure candy for the ear, and absolutely demonstrates how Guthrie has made delicate and creative use of the surround field, while also remaining focused on the two front channels.

The third track, Pigs (Three Different Ones), continues to show off the impressive new sonics that Guthrie has revealed. Drums are full, crisp, and punchy. The kick is solid, and the tom-toms are rigorously rich. The ominous bass seemingly has found an extra octave that hunkers down under the sparkling guitars and glistening keyboards. The surround channels are filled with ambient reverb of various parts, along with secondary overlays that embellish the piece, including backing vocals and arpeggiated keyboards. Dynamics are truly on fire throughout with no brick walling which unfortunately has become even more common with the loudness wars over the past decade.

I appreciate the depth that provides an enormity of space for the secondary electric guitar to fall into, while the rhythm guitar chunkily accents the bass and drums. Pink Floyd absolutely takes the production of the Animals album to a new level, and the remix dramatically extends the overall sound quality. Every part is well manicured, precisely placed to build the aural story while accentuating the lyrics. With the moderate changes in balance between the various instruments and voices, I find myself hearing parts that had been somewhat obscured in the original mix.

The final immersive track, “Sheep” often has been my favorite for its blistering guitar work, hammering drums, and revelatory bass. The magic is steeped in the lyrics, the highly dynamic aspects, that even includes Wright’s delicate Fender Rhodes at the beginning, and the cooled down bridge that includes the prayer. Speaking of the prayer, the voices are spread across the sound field, allowing for ease of clarity, yet losing the somewhat ambiguous ghostly sound that still can be heard on the new stereo mix when the voices are laid on top of one another. I must note that I found the secondary delays of the primary guitars, especially at the end, to be a lot hotter than the original mix, which gives it a wider and much larger feel. But all in all, I felt immersed throughout the album, and that makes the price of admission totally worth it for me.

A minor knit-pick for me is the seriously subdued chirping of the birds between Sheep and Pigs on the Wing, part 2. It exists on the stereo remix, but just doesn’t have that nature feel on the surround version. So, speaking of the new stereo mix. This is a real winner for me, given the overall improved clarity. Yes, even with the balance changes, I already feel very comfortable with this version over the original mix. There are numerous reasons, most of which I have touched on above, and include improved drum sound, clearer guitars and synths, along with the ever so round bass. Yet, it still goes beyond these comments, to include noting the fantastic channel separation, excellent dynamics, and utter transparency.

Readers often ask about my rating, which I generally don’t offer, as they can be very personal, just like one’s own ears and audio system setup. While I dream of more ear candy, the more I listen to the 5.1 surround mix of Animals, the further I recognize the genius behind the mix that is presented. Simply put, if you are a Pink Floyd fan and a surround enthusiast, this Blu-ray is a must have. If you appreciate high quality stereo mixes, get this Blu-ray. For those who are uninitiated into the world of Pink Floyd, this is generally not the best album to start with, but it is by far one of their best, so for followers of progressive rock, just get it! One last thing to note, the Super Deluxe version which contains an LP, CD, DVD, and Blu-ray is best for all in Floydians, especially those who wish to collect the 32-page book. As is very evident, I went for the stand-alone Blu-ray as it offers the same content as the Super Deluxe set. But don’t expect to find any Easter Eggs on any of these editions, including the Snowy White solo that links Pigs on the Wing together for the 8-track edition that was released back in the day. I am pretty sure the production team won’t make that mistake twice, this is the album only, nothing more.