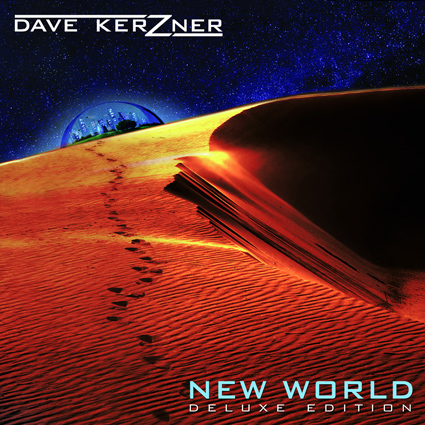 Fans who like Pink Floyd’s “The Wall” will surely be enthralled width Dave Kerzner’s debut solo album, “New World.”  A former member of the Progressive Rock band “Sound of Contact,” his new release has been mixed by legendary engineer Tom Lord-Alge, and is available as a FLAC 24bit / 96hKz download and on CD.  Along with Kerzner on vocals and keyboards, the album features  special guest Steve Hackett on guitars, Nick D’Virgilio of Spocks Beard, Durga McBroom from Pink Floyd, a mini moog solo by Keith Emerson, and Jason Scheff of Chicago, among others.

Also known as  “Squids”, Dave Kerzner is a songwriter, producer, keyboardist and vocalist with a long list of collaborations in the world of prog.  After many years working in sound design and production with SR and as a keyboardist with other artists, Dave decided it was time to take center stage as lead vocalist and put out his first Progressive Rock album as a solo artist.

As a fan of multi-channel mixes, this release would lend itself well to that format.  However, we only have a high resolution stereo offering that includes over 220 minutes of music.  Generally the mix is well balanced and has excellent dynamics, the sound stage is moderately wide, but there is a heavy weighting to the upper mid-range, which push the keyboards out a bit more.

The album “New World” follows the tale of a space pilot who has crashed in a desert. The traveler is injured and delirious on a hostile landscape. There is very little water and the desert is patrolled by killing machines, and so unfolds this great concept album.

The Floyd influence is immediately apparent on the opening track “Stranded” a five part epic. Steve Hackett adds a great guitar solo, and also listen for the wonderful backing vocals by Ana Cristina, Durga McBroom from Pink Floyd and Jason Scheff from Chicago.

As the mission starts we are thrown into prog heaven with “Into The Sun.” Colin Edwin is featured on bass with Heather Findlay on backing vocals. Band member Fernando Perdomo takes us out on both guitar and bass on this incredible start to this journey.

Kerzner pulls out all the stops and plays all the parts on “Under Control,” with an warm throbbing acoustic guitar and incredibly clean vocals, all leading into a neo-prog heaviness of beating drums and pumping bass with awesome dynamics throughout.  Here is where you know for sure that having the hi-res version pays off.

Using the Keith Emerson’s Sound Reality solo as the basis for the instrumental song “Crossing Of Fates,” check out these virtuoso players dueling in out in keyboard heaven. Meanwhile the awesome rhythm section of Billy Sherwood on bass and Simon Philips on drums drive the listeners through this track.

Keep in mind that there are two unique versions of this album, and when purchasing the Deluxe Edition download you’ll get it all in hi-res, including 12 additional songs.

The title track “New World” is yet another stunning song on this incredibly dynamic release. Francis Dunnery adds some great guitar work and the backing vocals from David Longdon from the band Big,Big Train blend well with this piece. Looking beyond the music, the lyrics are absolute sheer poetry.

The album closes with “Redemption”, effectively the 6th through 10th parts of Stranded. This epic song moves through so many changes in mood and tempo, really keeping the best for last.  I found it filled with spine tingling sections, and it certainly seems that all of the musicians pull out all the stops. Francis Dunnery plays a mean guitar solo along with Steve Hackett’s stunning guitar work.

To find out if the traveler survives you’ll simply need to pick up your copy of this masterpiece. Strongly recommended for prog-rock fans, and desirable for hi-res audio enthusiasts.  Simply put, New World contains top notch quality writing, playing and production from start to finish.  Overall I am blown away by the whole Deluxe Edition download package.  It is a must have in my book.