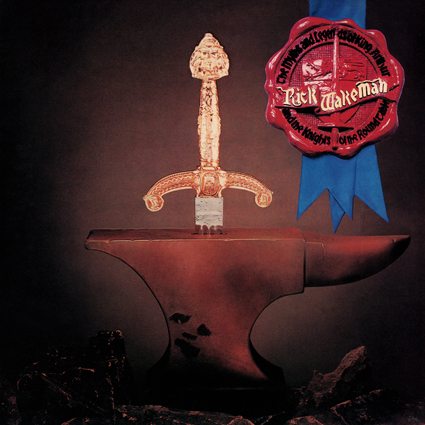 Prior to Wakeman’s 2015 U.K. tour, the second of his two deluxe reissues have hit the street on February 2. His 1975 “The Myths And Legends Of King Arthur And The Knights Of The Round Table were released via Universal Music and the CD/DVD contains what is reportedly an all new quadraphonic mix.

Remastered at Abbey Road, a CD, Vinyl LP and digital format are also available in new packaging. Reaching no2 in 1975, Wakeman’s third title, “The Myths And Legends Of King Arthur And The Knights of the Round Table” has been given a whole new life in this 2015 edition.

Certainly an extremely orchestrated album with many parts, Myths and Legends quad mix places the listener in the center of swirling and hard panned parts that create a somewhat disjointed soundstage. Unlike the majority of modern day multi-channel mixes, there are many unexpected movements and placements of parts as the album progresses from track to track.

I found the mix lacking a round low end and drums that carried no real punch. The general balance was good, but various parts fought to have their place within the overall mix, with some synths segments and vocals taking prominence over shadowing their counterparts.

Regardless, the quad mix is revealing and offers an immersive experience into this incredible work created by Wakeman some 40 years ago. Both MLP 24-bit / 96kHz Lossless and DTS 24-bit / 96kHz Quad and Stereo mixes are available on the DVD disc. Listeners will find a slight coloration different between the MLP and DTS versions, for which I ended up preferring the DTS due to a fuller low-end.

As a surround sound enthusiast, I sadly found a surprising difference between the stereo and quad mixes, mostly effecting the overall balance. The stereo mix works much better for me from a balance perspective, with parts fitting as one would expect. I even found the drums to have greater punch and didn’t sense any one part standing out too far from its counterparts.

While I still am delighted to have a quad mix and high resolution version of the stereo mix, I can only recommend this release for the fans that must collect all surround sound releases, or fans that desire the highest resolution stereo release. By no means is this a disastrous re-issue, it just isn’t up to the level of quality of other recent reviews found here on Mediaversal.