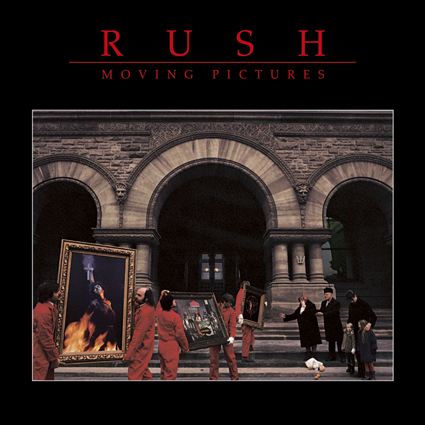 Seven years in and their ninth release, Rush released their critically acclaimed Moving Pictures,  often considered one of the greatest  hard rock albums of all times. Taking some cues from the new wave movement they superbly blend their progressive hard rock approach, all honed to perfection.  This release is chalk full of classics, and the band performs several songs regularly in concert and classic rock radio often pulls from this album too. While other hard rock bands at the time experimented unsuccessfully with other musical styles, Rush were one of the few to successfully cross over. Rush proved with Moving Pictures that there was still uncharted territory to explore within the hard rock format, and were rewarded with their most enduring and popular album.

The stunning 5.1 surround sound mix was supervised by the band's Alex Lifeson using the original multi-tracks and the stereo mix was remastered from the original analog master tapes. Both DVD & Blu-ray formats boast the 5.1 surround sound and stereo audio in 96kHz/24-bit high-resolution audio, providing the. Blu-ray discs will also feature DTS-HD Master Audio 5.1 surround sound. Remastering was done by Andy VanDette at MAsterdisk, where Moving Pictures was mastered originally, and it sounds full and warm.

The DTS-HD version on the Blu-ray disc adds a fullness to the bottom end, and smoothes the bright tops that are predominant in the mix. Synths pull the listener towards the back on the first track Tom Sawyer, while second guitars fill the rears on Red Barchetta, a powerful sound desired by all Marshall stack rockers.  Get ready to be whipped on the third track, YYZ, where Neil Peart's drums circle around you, as this instrumental track shows off the talents of this Canadian power trio. While the stereo mix offers some excellent depth, and is a perfect companion when traveling,  the surround mix places the listener into a cavernous space well utilized by all channel reverb, panning of instruments among the five main channels, with some sweet movements from front to rear, and a wide spread on the drum kit.