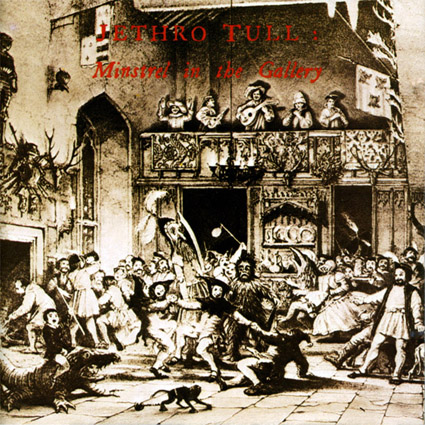 Continuing their 40th Anniversary re-issue series, Jethro Tull is releasing their epic 1975 “Minstrel in the Gallery” album featuring 5.1 and Stereo mixes by none other than audio extraordinaire Steven Wilson.

A live recording of the band performing at the Olympia in Paris on July 5, 1975 is included on a second disc and features 5.1 and Stereo mixes by King Crimson's Jakko Jakszyk. This new La Grande Edition also includes the b-side Summerday Sands, several studio outtakes and session material recorded for the BBC.

Getting this remixed re-issue is worth it just for the improved sound quality alone. The heaps of muddiness are stripped away, providing listeners with a crisp, clean, and clear version from which it is easy to hear every single sonic detail. Anderson's acoustic guitar is sparkling and warm, while Barrie Barlow's percussion is brilliantly distinct. However, Martin Barre's electric guitar, which was penetrating enough on the original mix, drives an ice pick through your head with razor precision.

I must admit this was never my favorite Jethro Tull album, yet it truly reflects the bands evolution from its blues roots and heavy rock tunes to the acoustic leaning subsequent album “Songs from the Wood” and “Too Old to Rock and Roll.” It is understandably another masterpiece in the bands canon.

Steven Wilson uses his typical parlor tricks for the creation of the 5.1 mix. Naturally much of the energy emanates from the front channels, with secondary parts placed behind the listener. It has become an easy to recognize fingerprint of Wilson’s style to add reflections from the rear channels, open up the sound stage, and develop a spectrum that is both resonant and vibrant. I expect nothing less, and once again he has made it all happen.

As one would anticipate, the original Quad mix takes a substantially different approach, with instrument placement unique to the Wilson 2015 5.1 remix. It is a delightful listen, although sonically not as clear, nor as dynamically balanced as the new mix. Wilson has taken the multi-tracks and undeniably added his mixing artistry to this classic progressive rock album. There are even a few aural candy surprises to discover for those seeking movement of parts around the soundstage.

The second DVD includes concert mixes by Jakko Jakszyk in both LPCM 24/96 and DTS 5.1 24/96 surround sound, and backwards compatible Dolby AC3 5.1 audio. There also is a lively video of “Minstrel in the Gallery” from the Paris concert, leaving fans only wishing for more film footage of this rock and roll flamboyance. But thre are tons of stills that slowly change as the concert plays.

On this disc fans will find a bunch of material from Tull’s Aqualung album, along with “Bungle in the Jungle,” “Skating Away on the Thin Ice of the New Day,” and “Critique Oblique” all among these concert recordings. Both “My God” and “Locomotive Breath” appear as ambitious mini-suites, plus “Minstrel in the Gallery” was previewed for the audience.

There is absolutely no question, the La Grande box set includes a wealth of very good extras well suited for Tull fans. While hi-res enthusiasts like myself are after the multi-channel remix of the album, we get a pretty darn good package with ample bonuses. Recommended for progressive rock fans, surround sound enthusiasts, and Tull completests.