Mary Fahl - From The Dark Side of the Moon - Blu-ray 5.1 surround review 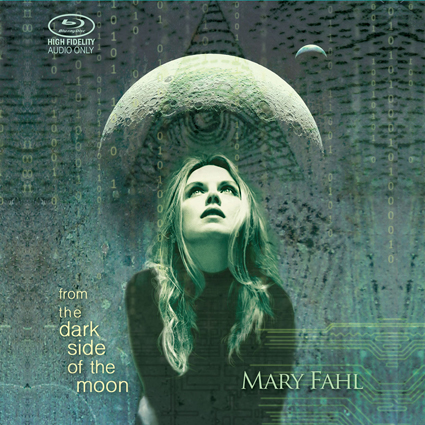 Mary Fahl gained initial widespread recognition during the brief three-year lifespan of October Project, a four piece group that released two albums in the early 1990’s. The progressive new age leaning music was embellished with her soaring and sweeping melodies that was sprinkled with influences of the alternative movement from that era. Over a decade later in 2006, Mary Fahl took a journey when she recorded From the Dark Side of the Moon (FTDSOM), a unique reimagination of the complete Dark Side of the Moon album by Pink Floyd. Fahl’s inspired interpretation was brilliantly mixed by Bob Clearmountain, who has mixed literally every album he has worked on since 2001 in both stereo and surround sound.

However, like many labels, the record company at that time (V2 Records) only released a stereo CD, which was an extremely limited run, and then they went out of business. Meanwhile, the 5.1 mix was shelved with Clearmountain and guitarist/producer Mark Doyle having been the only people to hear it at that time.

Skipping forward into 2020, several years after the rights were secured by Fahl, FTDSOTM has been remastered into a universal surround format on Blu-ray. The disc contains both hi-res stereo and multi-channel in 24-bit / 96kHz lossless formats and available through her website. Read on to discover why you will want this in your collection.

There is a lot to live up to when covering the longest running album on the Billboard Album Charts. Pink Floyd’s the Darkside of the Moon not only hit number one on the album charts but went onto stay there for 741 weeks from 1973 to 1988! It was also mixed in quadrophonic by Alan Parsons and subsequently remixed in 5.1 by James Guthrie. Both multi-channel versions have often been used as demonstrations for the capability of quad and surround, making it an even steeper hill to climb when reimagining a masterpiece.

Yet, Fahl seems to have effortlessly climbed such a hill as is evident from the moment the album starts with the rich tribal drum beat which symbolizes the heartbeat heard on the original Floyd version of “Speak to Me.” Surround enthusiasts will find themselves immediately immersed with a variety of haunting sounds and spoken words from all directions that build the space spreading from the tribal drum beat up front.

At the onset, the high quality of the recording and mixing shine through, exemplified by the riveting lows emanating from the front channels and deeply from the subs. I rather like how the synthesizer swells push from the back channels, leading into the next track “Breathe.” Guitars arpeggiated chordal structures call and respond between the left and right front channels with glistening brilliance and a warm timbre. With perfect transparency Fahl’s vocals soar from the center channel hanging overtop the airy ambience with liquid reverberant subtleties that spatter across the listening space. Her voice is enhanced by guitars and synth parts that smoothly spread across the soundscape with a luscious brilliance from the front to the back giving way to a grand dimensionality to the surround mix.

On the original Pink Floyd album the third track “On the Run” was not only an inspiring stereo masterpiece, but even a more remarkable mix in the Quad space and then taken to new heights on the Surround remix 30 years later with the use of modern day automation technology. On Fahl’s 2006 reimagined release, her interpretation of this song sheds an outstanding new light that has been placed into a very modern space where in Clearmountain has maintained the discrete movement supplying plenty of ear candy fancied by many quadroholics. Percussive vocal chants swirl around the room and guitar riffs rapidly move across the front channels. However, soon it dramatically diverges, stepping into the techno world with a rich baseline and losing the footsteps that are often associated with this piece.

Again, Fahl has taken dramatic liberties in advancing the sound of this classic album by effectively forgoing the striking of the clock chimes, instead using digitized versions and car alarms in their place. I find myself a bit of a curmudgeon, wishing for the dated sounds, yet I find that this modernization is absolutely appropriate, and of course dig the immersion aspect of the surround mix as these sound effects fill the listening room from all corners.

I continue to be astounded by the 5.1 mix which has completely immersed me from the moment the album started. Like the 1973 album this 2006 reimagined version FTDSOTM plants a marker in time by using the tools of that moment and going on to build on the techno driven technology that is available to musicians of that era. Now entering into the song “Time” which heads further into this vane with a downbeat techno feel, there are some moments on the album where I feel that it is a bit weighted toward the lower regions, smothering the brilliance of the brilliant highs. Still while I make this comment, I keep realizing that it is a very analog sounding mix that has been accomplished in the digital age, and kudos are certainly in order to all of the engineers involved!

But, the brilliance certainly is not lost, and as the drums kick in from the center channel there is a light crispness that zing through the upper mid-range while all the roundness of the synthesizer and the deepness of the bass blend across the front channels. Check out how synth elements sneak up from the back channels complementing the band up front and reminding listeners that this is a surround mix with full immersive capabilities. Yes, there is some front centric wait, however, I do feel that the back channels are given plenty of room to shine.

For October project fans, it is remarkable how much of the sound of the band truly was reliant on Mary Fahl’s vocals. When listening to FTDSOTM, one can easily hear her unique vocals brought forward in a sound that takes on a modern day version of October Project

Winding down the traditional first side of the album, for some fans the track “The Great Gig in the Sky” may simply be worth the price of admission. Fahl’s remarkable rendition of this song takes her vocals to stellar heights in the front channel while guitars dreamily play in the back left channel and synthesizers roll in from the back right channel. I generally feel the soundstage is comfortably wide end deeply filling the space between the front and rear speakers.

Let it be known that there is plenty more to explore on the ‘second side’ of the album, which Fahl has maintained the gap, just as if it was a vinyl release. This is for you to explore, but I will add, that surround enthusiasts will hear the resilient bass plucking from the center channel and elements have been thrown beyond the speakers at points, creating an absolutely sensational surround mix.

There is no question in my mind that this is Clearmountain’s absolute best 5.1 mix, certainly worthy of being another demonstration disc for those sharing their passion for the surround mix artform with their buddies.

Also, the stereo LPCM 96k / 24-bit version it is very compelling for audio files with a two speaker configuration. I affectively found no tonal difference between the two mixes, and in fact rather enjoy the very analog feel that is also herd on this mix. Of course, while I miss the depth of the utilization of the back channels, the stereo mix is stellar, and nor did I find parts smothering one another. Naturally, the surround mix will still be my go-to version, but the 2.0 mix is a fantastic alternative and I am delighted that it was included on the Blu-ray edition.

I think by now I have made it amply evident that FTDSOTM is a must have disc, especially for fans of the original Pink Floyd Dark Side of the Moon album. Likewise, for any fans of Mary Fahl and the October project this disk is utterly worth its weight in gold. As mentioned earlier the mix is demonstration worthy and the sound quality is top notch. Do not miss picking up a copy of this album.