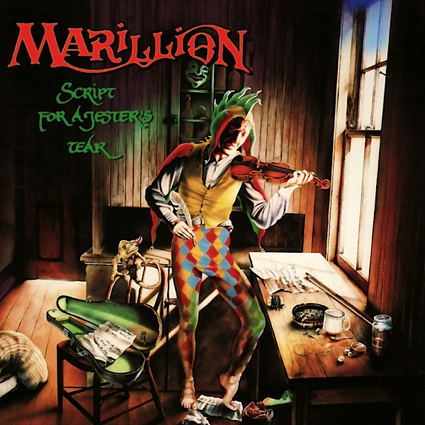 When I first heard Marillion’s 1983 debut “Script for a Jester's Tear” I was delighted at the prospect of a new generation of prog rockers that created a modern take on the sound of early Genesis. Their complex and intricate entry is often still considered the band's best, setting a high bar for their later releases. The album is chalk full of songs that are staples at their live gigs, starting with the title track.

Now, nearly forty years later, Script for a Jester’s Tear has been released as a deluxe, 4 CD + 1 Blu-ray Edition on Esoteric Records. The set contains a remixed stereo version by Andy Bradfield and Avril Mackintosh, plus an all-new 5.1 Surround mix of the complete album. In addition, the 5 disc collection also features new stereo remixes of the B-side “Charting The Single” which had originally been released in January 1982, along with the “Market Square Heroes” EP that followed in October later that year.

The fifth disc is a Blu-ray which features 96kHz / 24-bit versions of the stereo remixes of the album and EP, and of course the new surround mixes, plus the Live at the Marquee Club concert. Rounding out the collection is a new documentary with band interviews that covers the 1979 formation of Marillion in Aylesbury through the release of Script for a Jester’s Tear in 1983.

Each of the deluxe editions that have been reissues by Marillion thus far have all been worthy additions to my collection, and Script for a Jester's Tear is no exception. Keeping in line with the previous surround mixes, the focus is weighted primarily in the front channels with ambience and light use of some discrete elements in the rears. I certainly do find myself pleasantly immersed while listening to the 5.1 mix, noticing secondary synth parts, occasional guitars, and voices placed behind the sweet spot.

I have found that the sound quality continues to expand on these deluxe editions, with the drums boasting exceptional clarity that is crisp and well defined. The bass is punchy with a snap that cuts through allowing the instrument to really shine, all while reaching down to the bottom. In fact, all elements have improved dynamics coming across with absolute transparency and awesome clarity. I especially like Fish’s lead vocals soaring from the center channel and reflecting from the back channels, providing enormous depth and space to the surround mix. Additionally, the ambience of the drums and other instruments provides a real spatial quality that also push the synthesizer solos deeply into the front speakers.

I must mention that I tend to set the level to listen between 75-80dB when reviewing these various releases. Consider this to be an optimal listening level for certain bands such as Marillion which offer absolute aural excitement at higher volumes. Additionally, since the back channels make subtle use of discrete elements they may become masked at lower volumes for some listeners, which can also be affected by ones listening room and overall setup.

“He Knows You Know” is definitely one of my favorite tracks off this album and I must be candid by stating that the stereo version comes across more impactful. The congruity of the mix layers the music in a way that is powerful and direct. In many ways I actually prefer the stereo mix, even though the surround mix is strongly weighted upfront, it feels more disjointed and seemingly lacks the dynamic umph that is so evident on the stereo mix.

Don’t miss all of the bonus material on the Blu-ray, which includes several videos, live concerts, and interviews with band members about the making of the album. The live content in particular is a treat for fans of the band.

Script for a Jester's Tear is another compelling release in the reissue deluxe edition series from Marillion, and certainly a must have for fans of the band. Surround enthusiasts are likely to want to include this in their collection given the overall sound quality and immersive nature of the mix. Audiophiles seeking an amazing sounding stereo mix will want to jump on this before it goes out of print.