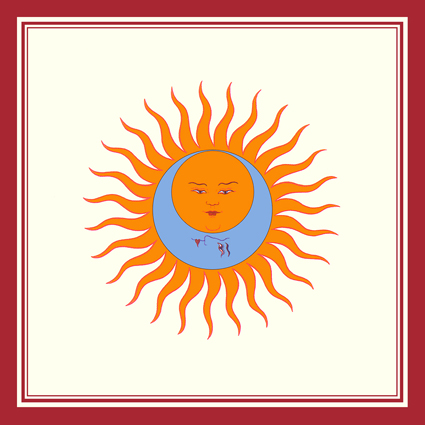 Crimson fans, it is time to rejoice, Larks' Tongues In Aspic has arrived as a 5.1 surround sound release with several live discs from that era.

With its raw tone, inspired improvisations and hard hitting odd-metered rhythms, the album marked a radical departure for this most forward thinking of groups and was the first to include Bill Bruford and John Wetton as band members.

Fans can pick up the standard CD and DVD-Audio set, or pay a bunch more coin and get the collector's edition which includes:

* CDs 1 - 9 feature 8 CDs of live material from audio restored bootlegs + a CD of live performance in a film studio.

* CDs 9 - 13 also feature 4 CDs of studio including a new stereo album mix, an album's worth of alt takes/mixes, the original 30th anniversary master + audio extras & an audio documentary CD drawn from the original session multi-tracks featuring the first take of every piece on the album.

* The DVD-A contains a 5.1 DTS Mix and High Resolution Stereo mixes (24bit/48khz). Listeners with either a DVD-Audio player or a Blu-Ray player that supports it, can additionally access a 5.1 Advanced Resolution (Lossless audio) mix. Also included is the original album mix, the new album mix, an album's worth of alternate mixes by Steven Wilson (in High Resolution stereo) and over 30 minutes of rare, previously unseen footage of the band.

* The Blu-Ray features a duplicate of the DVD-Audio content + many additional audio features in full lossless 24/96.

NOTE: Collector's Edition limited to initial orders with a once only maximum pressing run of 7,000 units worldwide  Housed in a 12" box with booklet (with copious sleeve notes and rare images), memorabilia, album print and concert download.