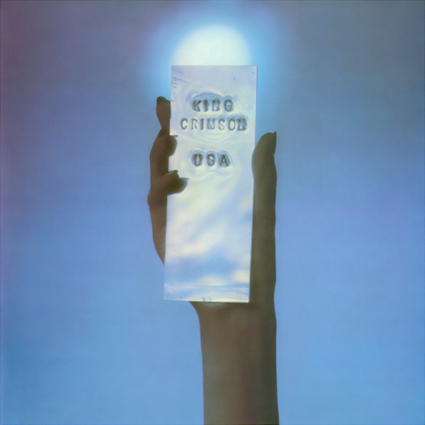 Continuing their 40th anniversary series, USA is the ninth album to receive the high resolution treatment.  The CD features a completely new stereo album mix of the full concert by Robert Fripp & David Singleton, while the DVD features High Resolution Stereo mixes (24bit/96khz) of all three editions of this concert album.  The discs come in a slipcase digipack format with Sid Smith sleeve notes, rare photos and archive material.

Originally released as a single album from recordings near the end of King Crimson's final US tour in June 1974. USA was issued as an epitaph for the band in the Spring of 1975 remaining in print through the mid-80s as the vinyl era was ending.  It first appeared on CD in October 2002 as an expanded edition.

So revered  is the reputation of the 1972-1974 King Crimson line-ups material so sought after that it justifies a full 21 CD/DVD/2 Blu-Ray collection of the US/Canadian tours of Spring/Summer 1974.  Thus, USA is Drawn from that massive release & presented in the 40th Anniversary series format, with the CD/DVD featureing a previously unreleased mix of the Asbury Park concert that formed the bulk of the original album, while the DVD features Hi-Res stereo versions of that mix, Ronan Chris Murphy's mix of the concert (issued on CD in 2006) & the expanded version of the original vinyl album as issued in 2002.  But be clear, unlike the remainder of the releases in this series, USA is a Hi-Resolution stereo only (not 5.1 Surround)- since Robert Fripp decided that the live power of the quartet is best experienced in stereo.

It is important to note that while a Blu-ray of USA is available, fans will need to shell out 8 to 10 times as much coin to obtain that version, which is only included in the massive Road to Red box set.  Also included in the same extensive set is the DVD-Audio version which is also available as a stand alone CD / DVD-A two disc set, and reviewed here.

The choice to release USA only as a stereo mix is only somewhat disappointing.  A surround mix would have typically placed the audience in the rear channels with some hall ambience. But, this effect would have substantially changed the texture of the recording without substantially adding any aural benefit.  However, there is no subwoofer channel, thus the guttural roar of the bass and kick drum are lacking.  The overall mix leans towards the mid-range, albeit with sparkling clarity.  Without a vinyl copy on hand, I can't make any direct comparisons, but I can say the new mix is well balanced and has very good separation.

What makes this set so compelling is both the high-resolution audio and the addition of two tracks that were omitted from the vinyl release since a second vinyl record would have been needed.  These additions include Starless which is particularly an incredible performance of this amazing song, along with Fracture which rounds out the 40th Anniversary version, along with the other seven tracks found on the original vinyl release.

Regardless of any shortcomings, USA is a must have for any King Crimson fan, and for those who can and are willing to shell out some major dollars, the extensive Road to Red is more than enough Crimson to last for a long while!

Audio CD and a DVD-Audio with Hi-Resolution 24/96 Stereo Mixes.