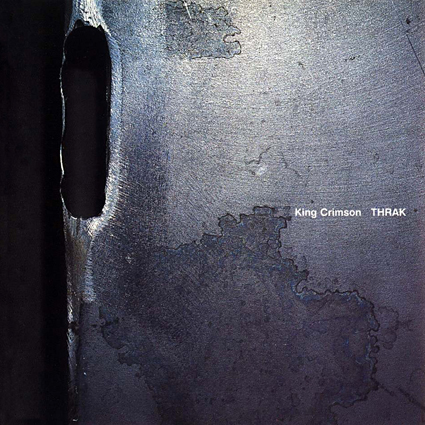 King Crimson continues to pump out more massive limited edition box sets, this time focused on their 1995 album THRAK, which features studio and live recordings, much of which has been previously unreleased.

The second Blu-ray features the previously unreleased complete concert filmed live at The Warfield Theatre, San Francisco from 1995, newly transferred and in 5.1 sound. Plus live footage from the 1995 Live in Japan performance - all footage newly transferred with remastered 5.1 audio. Also included on this disc and up-mixed for surround sound is Tony's Road Movies drawn from the band's earliest rehearsals in 1994.

The box also includes two DVD’s with a limited selection of the above and several CD’s of much of the same plus Byte Size THRAK containing a compilation of singles edits, live tracks from promos, along with a 12" mix edit. Fans also get an album-sized booklet with sleeve notes by Sid Smith, technical notes on the recordings by David Singleton, a bunch of rare and unseen photos, plus other memorabilia. Burning Shed has complete details of what is included in this extravagant box set.

Now let’s be clear, this review is for the Limited Edition 12 CD, 2 DVD, and 2 Blu-ray edition. Sure, you could pick up the CD / DVD combo and get the original album newly mixed in surround. But why settle for less when there is so much to be had in this super deluxe box set?

I asked myself this very question when I pushed the order now button. At well over $100 US it simply seemed outlandish for an album that has never been a contender for a top favorite by King Crimson. Yet, now with the package in hand, and having listened to much of the material presented over the various discs, I am absolutely delighted to have spent this much coin on THRAK.

Never think for a moment that only Steven Wilson is qualified to create amazing 5.1 multi-channel mixes. THRAK is simply an incredible example of how Jakszyk and Fripp easily match the caliber of top notch surround sound mixes Wilson has done thus far. With killer larger than life drums that pound around the soundstage, a grinding resonant bass, and searing guitars, it is very difficult to get any better than this level of sound quality.

This truly discreet and room filling mix opens up the music showcasing parts that are somewhat hidden within the stereo layer. Dynamics are fantastic and balance superlative. Naturally sitting in the sweet spot yields an immersive listening experience with cross channel movement, as well as front to rear ambience.

For those who are insane enough to pick up this lavish box set will be engrossed in so much King Crimson that they may not have time for anything else. But you won’t be sorry, as the additions are totally worth it. ATTAKcATHRAK is taken from a live show and presented in a discrete 5.1 mix that will kick you upside down and ring out whatever notion you had for silence. This is an onslaught of primarily heavy bashing taken to an extreme level of noise, a wonderful blend of improvisation and a masterful collaboration of musicianship.

However, it doesn’t stop there, just select the Kcensington THRAK concert and you’ll be transported to their London shows in 1995 all mixed from multi-track tapes as if you were at the concert. There is limited discrete rear channel action, but plenty of room ambience and energy to rock any listener to their core. Other than previous video releases, Kcensington THRAK is their first live show available in surround sound. Take what you need when you put this on, and enjoy a full concert experience!

No, there is still more on the first Blu-ray, and those who picked up only the single DVD-A may be the ones checking themselves in, because you would be crazy not to buy this super deluxe box set! From a musicians viewpoint the JurassiKc THRAK stereo LPCM transfer peers into the studio and the construction of several songs from THRAK, even showing Beatles influences and the raw licks behind their pieces. Also found here is the official live bootleg of the double trio in Argentina: B'Boom, plus THRAKaTTAK which contains more wild noises to fill your room.

The second Blu-ray contains a very good HD film of the band’s 1995 concert at The Warfield Theatre in San Francisco. You’ll get a front row seat with excellent sound that goes beyond room ambience in the rear channels, while still maintaining the live frontal assault of a live concert. Don’t worry, you wont’ be bothered by some guy yelling in your ear, nor be drowned in beer that is spilled all over you, but you will still be taken to the theater and re-live this awesome performance right from the comfort of your favorite seat!

There are many improvisational moments of genius that reveal their selves when watching and listening to Tony’s Road Movies. These are taken from their 1994 rehearsals and overlaid with footage that is merely eye candy for those who need more than one of their senses engaged at a time. While there is nothing truly spectacular here, musicians will find this of interest when considering the creative process. Don’t expect much from the Road Movies surround up-mix, it is the music that counts here.
All in all, I have made it abundantly clear that this is an extremely worthwhile deluxe edition to add to your collection. The THRAK limited edition is a must have for surround sound collectors, fans of King Crimson, and especially listeners who are ready to be hit over the head with the improvisational force of this amazing band. Can you tell I am ecstatic with this purchase?