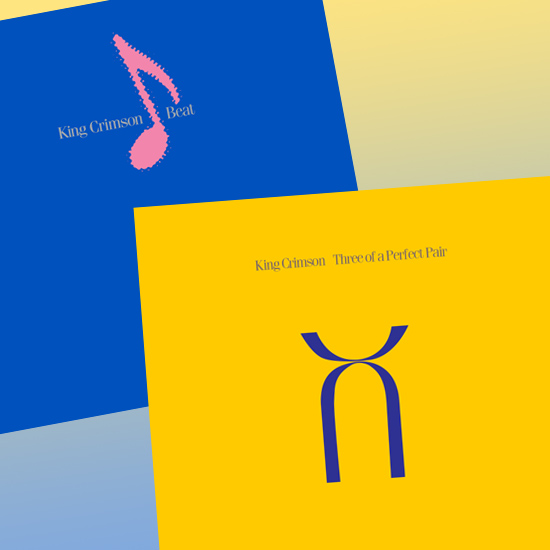 I am sure I don’t need to tell you how amazing this King Crimson lineup is. With guitarists Robert Fripp and Adrian Belew playing off one another, Tony Levin dropping in the deepest notes, and Bill Bruford carrying the rhythm, the group speaks for itself. Incredibly they created three perfect albums in the 1980’s and now the 40th Anniversary King Crimson series continues with the later two releases “Beat” and “Three of a Perfect Pair.” Audio engineer Steven Wilson and founding band member Robert Fripp have created the all new stereo and 5.1 surround mixes, each containing extra tracks, making this the definitive edition of these two classic King Crimson albums.

I have waited five years for the second and third installments of these acclaimed King Crimson albums. These extremely influential Ethno-Art-Rock releases from their unique progressive leaning 1980s trilogy have been re-tooled for the 21st Century. I wager this was what the Schizoid Man predicted they would sound like.

Hi-Res listeners will only need to play the Region Free DVD-A’s which showcases new 24-bit / 96kHz 5.1 Lossless and DTS mixes as well as Lossless High Resolution Stereo mixes. Both releases include the original album mix and the 2016 album mix in Hi-Res 24/96 stereo., plus the DVD-A features the complete Beat album in rough mix form dating from the time of the original sessions, while the Three of a Perfect Pair release includes additional tracks called the Other Side.

Hold your breath, everything featured on these CD/DVD-A’s will also appear in a super deluxe box set chronicling King Crimson's 1980s material. That super deluxe box set contains a wealth of additional material and is made available on both DVD and Blu-ray formats exclusive to that set, and naturally incorporates the first album “Discipline” from the bands 80’s trilogy. Savvy shoppers may find the additional costs well worth it when compared to picking up each of the three releases separately. Check the prices at the various links below for the best offer, however reviewed here are the CD/DVD sets.

When I first listened to the surround sound mix of their 1982 album “Beat,” I immediately noticed a direct and crisp vocal track that bothered me so much I had to pull my vinyl copy off the shelf. I remembered some slight delay that provided space for Belew’s lead vocals. Yes, this exists and has been extended toward the back channels on the 5.1 mix, causing the starkness of the vocals up front, but it is folded down to fall under his vocals in the new stereo mix. I specifically mention this because when re-painting an aural scape, it is effectively a forgery of the original, with such minor changes that can alter the character of the piece. Remixes don’t always have to be this perfect, and many are completely different, and designed as such. But, when taking a classic masterpiece and expanding it to surround, it is like making a 3D painting from a 2D canvas, it will never be the same. However, ideally fans want it to be the same, just with all that extra depth and vigor sound stage provided by a multi-channel mix.

Enough said about the subtle differences between old and new mixes. Steven Wilson once again has created superlative mixes of both albums, bringing a vivid shine and expansive sound stage to some of my favorite KC albums. “Neal and Jack and Me” riffs in with guitars in the front and rear channels with their fast paced arpeggiated licks with a striking clarity that defines the upper range, while remaining full in the mids. Levin’s bass rocks the house with plenty of punch, and lacks the hump which can be heard on the vinyl version, all while resiliently carrying the bottom. Bruford’s drums are rich and snappy with a wonderful thwap to the kick and solid snap as he hits the snare, and an excellent tingle of the cymbals. I wouldn’t expect anything less from mixing guru Wilson, especially given the fantastic quality of the original recordings.

The instrumental track “Sartori in Tangier” is an absolutely amazing surround mix with the snare hits reverberating from the front to the back channels. Lead guitars soar across the room escalating to new heights as the band throttles forward. Dig the break as a wash of sound pushes from the rears up to the front channels. Truly a magnificent surround experience.

But the magnum opus multi-channel mix goes to “Neurotica,” which thrusts in with sirens screeching from the back left and moving around the four channels, along with a whistle blaring from the back right, and car horns moving between various speakers. Belew’s announcing vocal track blares from the front center channel and hits off the walls in the back channels. While the bass is rooted up front, guitars lay their patterns down in both the front and rear channels. Neurotica is an immersive 5.1 mix that alone is worth the price of admission.

“Two Hands” gives some space to the percussion as it percolates from the rear right channel and guitars fill the back left and fronts. I am usually a big fan of extended versions, however “Requiem’s” new lengthy intro doesn’t really fit with the balance of Beat. Sure, it would be find on a Frippertronics release, and I welcome hearing it. Once you feel chilled out, you’ll be bamboozled, bringing to a close another great King Crimson album.

Fans will also find a surround version of Absent Lovers, and alternate versions of the album, plus a video of Hartbeat, among other extras on this DVD-A.

Listening to the next album “Three of a Perfect Pair” reveals an elevated kick drum that started to become common for mix engineers in that era. The full bodied thud of Bruford’s kick compliments Levin’s round bass that appears to have more weight than heard on Beat. The title track opens this release with great use of backing vocals emanating from the rear channels as they respond to Belew’s main vocal up front. I hate to say it for all the Belew fans like myself out there, he dominates the King Crimson sound on these albums. Not a bad thing from my perspective, but important to note for Fripp devotees.

The pop sensibility that Belew brings to the group is lost on the eerie track “Nuages (That Which Passes, Passes Like Clouds)” which features dark Frippertronics in the back right speaker, with stratospheric eeriness from the left side and lead guitar shimmering up front. With only a few layers, there is a wealth of space which is completed with percussion and bass up front in the center. This track completes what is known as the “Left Side,” and is actually side 1 of the original vinyl LP.

The raw energy of KC is revived on the “Right Side,” which primarily features instrumental tracks that Wilson has masterfully mixed in surround sound. The drum kit is spread widely across the front channels on “No Warning” with bright whip-like hits from the left and cymbals on the right, held down by a pounding kick and tom toms in the center. Guitars roar from the back channels with bass rumbling up front. I won’t give away the amazing mix of the albums original final track “Larks' Tongues in Aspic, Part III,” only to say be prepared for a 5.1 aural onslaught.

A couple of tracks have been added to this 1984 release, known as the “Other Side,” some mixed in surround. One of these is an ever so British “The King Crimson Barber Shop” with all four members singing a cappella from the far corners of the room encompassing the listener with a quartet of Crimson. You’ll need to head to the Extras menu for the 30th anniversary remastered original mix which also contains all six of the tracks in stereo from the “Other Side” and a video of Sleepless.

All in all both Beat and Three of a Perfect Pair are a welcome addition to the surround sound world, and certainly a must have for King Crimson fans. Both releases are also strongly recommended for prog-rock lovers and 5.1 enthusiasts. Whether you pick up the stand alone discs or spring for the super deluxe box set, you won’t be disappointed. My collection would not be complete without these albums, and nor will yours.