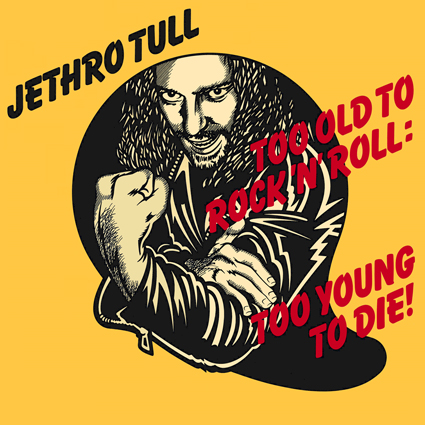 Surround Sound and Hi-Res enthusiast have been enjoying several re-issues from Jethro Tull over the past few years. Each re-issue has been meticulously remixed by Steven Wilson and often contains additional material. Thus it is no surprise that their 1976 release “Too Old To Rock 'n' Roll, Too Young To Die” follows in the same format, but with a twist.

While in the past all of the multi-tracks for each album were located, unfortunately three out of the eight multi-tracks for Too Old to Rock ‘n’ Roll have gone missing. Thus for the first time, the majority of the original album won’t receive a multi-channel re-mix. However, an entire version recorded for a 1976 UK TV special features a previously unreleased re-recorded version of the entire album in 24bit / 96kHz DTS surround, Dolby Digital Surround Sound and Dolby Digital Stereo sound. Additionally there are flat transfers of the original album as well as a host of rare associated recordings including previously unreleased material. Also included are flat transfers of the original Quad LP Production Master in both DTS and Dolby Digital.

Obviously for Album completests, either the original Quad and Stereo mixes are the only answer. However, the TV recording is a literal facsimile of the original album, albeit with many subtle differences that fine tuned ears will easily notice. Most evident are the sligt vocal phrasing differences, and somewhat loose timing among the musicians, both lending to a more organic live feel. Solos have been extemporaneously modified and parts not exacting to the album. For me, it is the compressed vocals, drums, and bass that unfortunately hamper my excitement for this version. Yet, the overall mix by Wilson is very good and it is great to have a complete version of this album in surround sound.

In fact, sad as it is, the all new mix of the original album has been bottom listed on the DVD-A. With over half the songs missing, including some of my favorites such as, Quiz Kid, Crazed Institution, Salamander, Taxi Grab, and Pied Piper, the remaining songs just don’t represent the album well at all. Of course, Wilson did a spectacular job at re-mixing the remaining tunes which include, “From A Dead Beat To An Old Greaser”, “Bad Eyed And Loveless”, “Big Dipper”, and “The Chequered Flag (Dead Or Alive). Wilson also created a stunning experience for fans of the title track, which clearly s the most outstanding of the 5 original remixes, srings naturally emanate from the rear channels, while guitars and keyboards are panned across the front channels, drums spread wide, with bass anchored in the middle and Anderson’s vocals placed in the center channel. Dynamics are very good along with clean up and clarity. Hi-Res fans have come to expect nothing less from Wilson’s remixes, and he continues to deliver on Too Old to Rock ‘n’ Roll, too Young to Die.

When all fails, we can still turn the clocks back to 1975 and kick back for the flat transfers of both the original and quad mixes. Both are presented in 24bit / 96kHz, and sound very good. However, the quad mix is simply one of the weakest I have heard to date, requiring plenty of chair spinning for surround enthusiasts who prefer to keep the lead vocals in the front channels. Oh, but that is not even saying where the drums will land in your sound stage. Pretty much a mess, and for all I know you’ll love it! Still much better than nothing, and most likely I am being too pessimistic about the quad mix.

The real question is whether or not this box set is worth it. By no means is this a must have, and furthermore it is one of the albums least liked by Jethro Tull fans. However, if you have been collecting the remaining deluxe releases, you’ll want to get this simply to complete your collection. I can say, it won’t be coming off the shelf nearly as often as the other fabulous surround sound releases at my house. At least the price is reasonable and you’ll get an entire TV show of the entire album in hi-res surround.