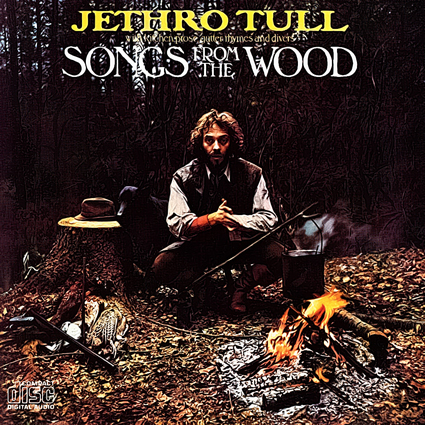 Songs from the Wood was the album that introduced me to Jethro Tull, and the first added to my vinyl collection when I was a teen. Thus, this has been the high resolution surround release I have been waiting for from this group during the past few years as earlier albums were given the anniversary treatment beforehand. Now that the wait is over, the Country Deluxe set is packed with 3 CD’s and 2 DVD’s that contain a 5.1 remix of one of Jethro Tull's most accessible albums along with a live concert filmed at the Capital Center in Landover, MD on November 21, 1977.

With a lush production, a slightly heavier use of keyboards, and distinctly acoustic leaning prog, there are plenty of layers to create a fully immersive surround mix. The NTSC region free DVD contains a 5.1 DTS 24bit / 96kHz codec, plus an AC3 Dolby Digital 5.1 for listeners unable to decode the DTS version. I am so hooked on surround, I rarely listen to the stereo mix which is available as a 24bit / 96kHz LPCM, and as one would expect the 2.0 version is a complete flattening of the magnificent multi-channel version reviewed here.

The title track is the opener, which immediately encompasses the listener with the various vocal parts harmonizing all around you. There is significant improvement of audio quality, especially to the low end, when compared to the original stereo and quad versions. However, purists like myself will notice decay differences in the a Capello parts along with a snare that has lost its snap, plus a diminished top end brilliance overall. Some of these aspects are likely due to the age of the tape, and possibly even the particular tape used, or it could be a production decision that fattened the snare, provided more mid-range warmth and boosted the low end. Fans may even feel that these changes are an improvement to audio quality, and I would tend to agree.

Cup of Wonder is a fine example of the immersive use of the many parts which are spread wonderfully around the sound stage. Flutes and strings rise from the back channels along with harmony vocals, while the core rhythm parts are spread across the front channels. Ian Anderson’s lead vocals and primary flute parts emanate from the center channel. The short vocal delay hits off the back channels giving him and the flute a larger than life sound.

The distinctly progressive Hunting Girl takes advantage of the center channel with Wilson mixing guitars, snare, and vocals to this channel. Anderson’s flute is heard from the back channels rolling toward the middle of the room. This creative use of the surround scape is engaging, making the long wait for Songs from the Wood so worth it.

The fully encompassing surround experience continues with Velvet Green which spreads the three instruments playing the melody across the room. At first it may appear as a simple remix with the instruments placed in the left and right channels moved to the back channels respectively. With drums and vocals holding down the front, as the song progresses, acoustic guitar and other parts are heard from the front channels, with new additions bubbling up behind the sweet spot.

Not only is the entire Songs from the Wood album remixed in 5.1 and 2.0 by Wilson, but an additional five bonus tracks have been mixed to surround too. These include the tracks Old Aces Die Hard and Working John, Working Joe, which are released here for the first time on any format.

If I haven’t made it clear enough, the 5.1 mix is absolutely fantastic, and one of the best by audio engineer Steven Wilson. Dynamically I am pleased with this release, and find the channel separation to be extremely good. Barring my complaints of tonal quality, the overall balance is spot on, and truly represents the original stereo mix very well. However, for fans who want to delve back to the original Quad mix, sadly there are only four of the nine quad versions of songs released back in 1977. Yet I don’t feel as though we are missing much, as the mixes of these four songs pale in comparison to the new 5.1 remixes, especially the ever so 70’s placement of parts which sounds unbalanced to my ear.

Additionally, what makes this set so compelling is the video footage filmed live at the Capital Centre which was played to the big screens in the venue during the show and has since been seen nowhere else. By no means is the footage refined, and of course it is chalk full of 70’s out of focus overlays, along with shots that simply didn’t work out during the live cut. However, it has been cleaned up and is a wonderful representation of Jethro Tull at the height of their career. Audio wise fans get the benefit of both a 16bit /48kHz stereo LPCM as well as their choice of a DTS 5.1 or AC3 Dolby Digital 5.1 surround version mixed by Jakko Jakszyk. Generally the sound is clear and instruments have been spread nicely across the front three channels. Following many other surround live mixes, the back channels have been reserved primarily for room reflections and audience noise. Although this transfer and mix lack dynamics heard on modern day live recordings, I am delighted to make it to one of their shows 40 years late!

As a side note, the first CD contains the Wilson remix of the original studio album, along with several associated recordings. The second and third CD’s are comprise of 22 live tracks, taken from the Songs From The Wood Tour across two dates: Boston Garden, Boston, MA on Dec 6, 1977 and Capital Centre, Landover, MD on Nov 21, 1977.

Similar to most of the previous Jethro Tull anniversary editions, the box set contains a 96-page book, which contains a plethora of beautiful images. Also there is extensive history of the album by Martin Webb who reflects on the writing, recording and touring of the album, while Ian Anderson gives a track by track annotation of the album and associated recordings.

OK, no bias here, this is absolutely a must have box set for surround enthusiasts, Jethro Tull fans, and progressive rock lovers. Not only is this a reasonably priced anniversary set, but it is also packed with extras, making the value that much better. Basically, this is a must have, period.