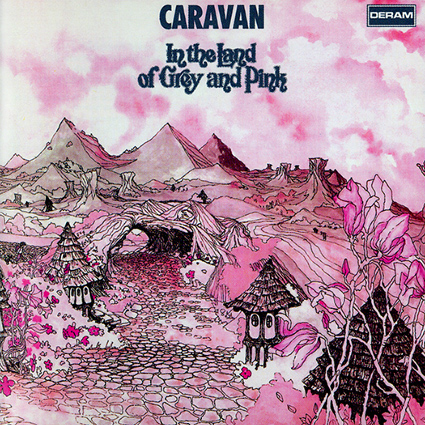 The quiet Cathedral City of Canterbury in Kent began to stir in the early sixties with music  of both pop and rock forms.,  a catalyst which later was to be known as " The Canterbury Sound", stemming from a band calling themselves "The Wilde Flowers" which formed in 1963 the band imploded in 1967, they split into two major fractions, one side ,the more avant-garde Jazz/Rock fusion minded musicians, Robert Wyatt,Hugh Hopper, Kevin Ayers, going off to form " Soft Machine ",  while the other more Pop/Rock members Richard Coughlan,Pye Hastings , David Sinclair , and his bass playing cousin Richard Sinclair , went off and formed "Caravan".
For the next year they went into retreat in the country, rehearsing every night in a nearby church hall. In 1968 they were snapped up by American Record label Verve who released their first album Caravan (1968). the label subsequently went bust .  Decca records signed them for their second album, " If I Could Do it Again I Would Do It All Over You" ( 1970) , and sent them out on the road.

After six months on the road promoting their second  album the band was ushered back into the recording studio for their third album, " In The Land Of The Grey And Pink"(1971). This became their seminal moment. And is an instantly recognizable sound. On" In the land of the Grey and Pink", what you actually get is three of Richard Sinclair's finest ever songs , one from Pye Hastings ( According to Pye that was fair enough as he had written most of the first two albums) , and side two of the vinyl album was taken up by the one twenty-two minute opus " Nine Feet Underground " which came in five separate movements,with four bridges , and was mainly written by David Sinclair, with the others linking all the parts together, and adding bits here and there.

The album opens with 'Golf Girl' a wonderful song of love, something we can all relate to . " Winter Wine", another Richard Sinclair song  follows, which is a  song of fairy tales and dreams which weaves along perfectly with the feeling of well being laid down by the first song. Next up is the Pye Hastings's composition " Love To Love You" .The title track another Richard Sinclair number is a nursery rhyme set to music as if sung to children , which includes a beautiful piano solos.

The albums epic "Nine Feet Underground" is a stunning display of exactly how well the members of Caravan had mastered their chosen instruments , including the duel lead vocals of Pye Hastings and Richard Sinclair. David Sinclair's keyboard's are in the front through out, the piano, Hammond organ and the mellotron are all given thorough workouts in the space allowed in Nine Feet Underground's twenty two minutes. Richard Sinclair adds jazzy bass, while Pye Hastings lays down melodic lead guitar, and Richard Coughlan hits it on the rock solid drumming.  .There is also room for Pye's brother Jimmy Hastings to come in and add some flute and tenor saxophone .

We picked up the expanded deluxe NTSC/Region 0 DVD plus two CD edition of this classic album,  which was remixed in 5.1 surround sound by Steven Wilson (Porcupine Tree).  Disc One contains the original album plus three brand new stereo mixes of album tracks,  disc Two contains four new stereo mixes of non-album tracks plus two previously unreleased recordings and five live tracks. Of course it is the third disc containing a Dolby Digital surround sound mix that intrigues us the most, and we are delighted.  As with all the King Crimson surround releases, Wilson has once again created an excellent surround mix that is clean, rich and spread evenly around the room.  A few mix tricks have been added which provide a sense of journey while listening.  Otherwise the majority of the multi-channel mix is pretty straight forward with bass and drums up front, along with vocals, guitars and keyboards spread to the back, along with the brass, but these are located in various places depending on the mix.  While this recording is a bit dry, it replicates the original mix very well, and represents how many recordings sounded during this era.  This is a must have for Caravan fans, and we highly recommend it to progressive rock collectors.

Note: An earlier version of this article incorrectly listed the DVD as containing a 24/96 DTS program for the surround mix, instead the DVD disc contains a Dolby Digital surround sound program, which is a lossy codec, and doesn't offer the range and clarity of DTS.