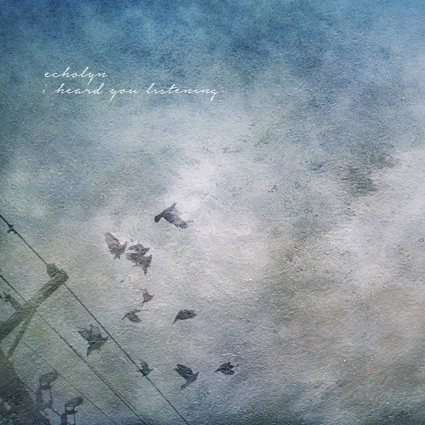 For those in the know you probably have already picked up your copy of, I Heard You Listening which is the eighth album from progressive rock band Echolyn's. The classically trained, highly professional members that consist of vocalist Ray Weston, keyboardist Chris Buzby, guitarist and vocalist Brett Kull, bassist Tom Hyatt and drummer Paul Ramsey present 60 minutes of nine new original songs on this independent release that is available as a high resolution 24bit / 96 kHz FLAC download from BandCamp.

Formed in the early 1990’s, Echolyn honed their instrumental prowess and progressive vocals on three independent releases, before being signed by Sony, only to call it quits soon there-after, putting out an album of unreleased demos and another with live recordings. A few years passed and they re-grouped going on to release a few more albums each with increased critical acclaim.

It is always a pleasure to see independent artist taking a strong interest in sound quality, and band member Brett Kull engineered and mixed their 2015 album at Catapult Sound with mastering handled by Ryan Smith @ Sterling Sound in NYC. While we are fans of multi-channel mixes hear at Mediaversal, listeners will find this hi-res release fills their room with fantastic sound.

As the album fades in on the opening track “Messenger of All’s Right” it is easy to hear how silent the noise floor is on this recording, with subtle percussive tingles and delicate piano parts spreading across the stereo sound stage. Deep and resilient bass thunder in with the drum kit, as powerful and emotional vocals are overlaid.

Taking a cue from the pop-world, “Warjazz” is probably the first song that will get stuck in your head. Echolyn’s refined playing translates directly to an extremely polished mix that shows off every part, all which is so silky smooth that fans seeking a raw edge will not find it here. In fact I actually miss a bit of punch from the drums, yet they fit so snuggly within the overall mix that I must be clear that this is a personal subjective view rather than a fault. I immediately was drawn into the catchy chorus that includes fantastic tom-heavy fills..

OK, forget about what I just wrote regarding the drums, as “Empyrean Views” has one of the best natural drum sounds I have heard to date. This is exactly why you want the hi-res version of this release, listeners would otherwise miss the subtleties of the stick hitting the hi-hat, the richness of the snare with air that surrounds it along with the round and full toms, yes, it is all there. But, my gosh, stop what you are doing, and sit down, turn up the volume and become surrounded by Echolyn. The mix continues to spread widely across the sound stage with great backing vocals exemplifying their songwriting skills. Take note to the final guitar and keyboards solos which don’t take over, yet are right there inspiring and adding depth to the song. As one would expect there is no harshness nor unwanted distortion anywhere, once again making it clear that high resolution audio is the best way to listen to music.

Fans of Gentle Giant will find their influence bleeding into “Once I Get Mine,” a very aggressive song with a strong organ part and complex harmonies. It is very difficult to really show off room ambience or even perceive unique digital room qualities on 16 bit CD’s, but this is very evident on the 24 bit / 96kHz FLAC download, adding a wonderful layer to an already excellent mix.

Either I have lost my mind, or in fact the raw energy I was missing at the beginning has really come through on the closing track “Vanishing Sun.” Even the bass grumbles with a punky edge and the guitars hammer out distorted rhythms. This edge translates very well showing some anger and freeness that simply isn’t there on earlier tunes, making it a great ending, to an excellent album.

Highly recommended for fans of progressive rock, neo-prog, and of course collectors of well recorded and mixed high resolution recordings. Echolyn doesn’t disappoint, listen to a low-res stream here and find out for yourself.